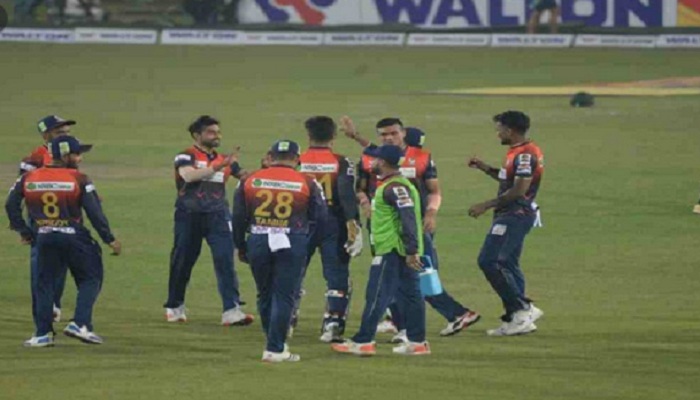 Failing to defend a moderate total of 132 against Fortune Barishal on Saturday, Minister Group Rajshahi faced their first defeat in the Bangabandhu T20 Cup.

However, Rajshahi managed to put only 132 for nine on the board in 20 overs.

And Barishal chased the target of 133 runs, losing five wickets, in 19 overs, riding on Tamim's unbeaten knock of 77.

Earlier, Najmul Hossain Shanto and Anisul Islam Emon put up a stable opening stand of 39 runs in six overs, but they failed to hold onto the good momentum.

Najmul fell prey to Abu Jayed for 24 when Rajshahi were batting at 39 from 6.1 overs. Then, in the last ball of the next over, Mehidy Hasan Miraz removed Rony Talukdar for six.

Mohammad Ashraful came to the wicket at number three, playing an unbeaten 25 in the last game. But this time, he had to leave the field only for six, being caught short of the crease.

Also, Mehidy Hasan Miraz dismissed Anisul Islam Emon at 24 in the same over.

However, Fazle Mahmud (31) and Mahadi Hasan (34) responded well to help their team put up a fighting total.

In reply, Tamim remained unbeaten for 77 off 61 balls with 10 fours and two sixes to register his team's first win in the competition. Barishal ended up on 136 for five in 19 overs.

Tamim and Mehidy opened the innings for Barishal. While Tamim was firm in the wicket, Mehidy fell prey to Ebadat Hossain for one.

And the quick dismissals of Afif Hossain (0) and Irfaan Sukkur (3) made the going tough for Barishal. But Tamim finished off in style.