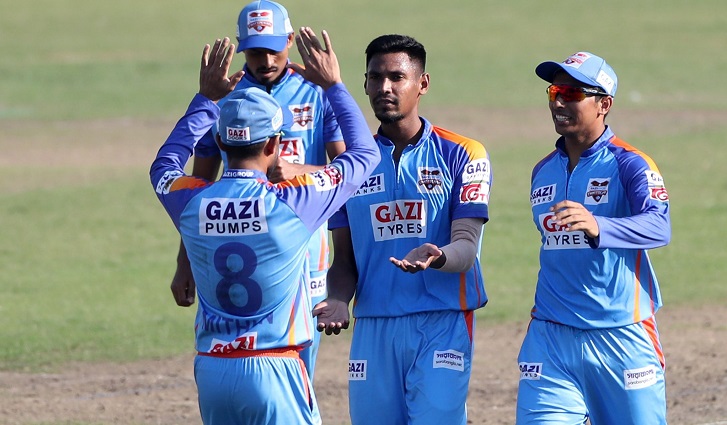 Mustafizur’s 4-5 was instrumental in dismissing Khulna for just 86 runs, a score that the Chattogram batsmen overhauled in just 13.4 overs.

Adorably called as the Fizz, Mustafizur was ably supported by Taijul Islam and Nahidul Islam who both scalped two wickets apiece to further extend the agony of the Khulna.

Shakib Al Hasan opened for the first time in T20 cricket in a bid to give Khulna a flying start after their regular openers struggled badly in the first two matches of the tournament.

However the experiment of sending Shakib as opener didn’t bring any good result as the all-rounder was dismissed for 3. His fellow opener Anamul Haque Bijoy was also removed for 6, leaving the side in danger.

Imrul Kayes briefly halted the march of rampant Chattogram bowler but when Taijul Islam got him with 21, Khulna was left at precarious situation.

Mustafizur who got the pitch to his likings because of its slow nature then joined the party to slice the middle order in a gem of pace bowling.

Ariful Haque who was the hero of Khulna’s first victory from the jaws of defeat with 34 ball-48 not out and also made 41 not out in the second game, this time couldn’t bail the side out of danger as he was out on 15.

Chattogram openers Liton Das and Soumya Sarkar got off to a decent start in pursuit of small targets. They added 73 runs in 10.5 overs before Soumya was dismissed for 26.

Soumya’s dismissal couldn’t distract Liton Das’s concentration as he soon helped the side win the game, hitting a 46 ball-53 not out that included nine fours. Mominul Haque was not out on 5 alongside him.