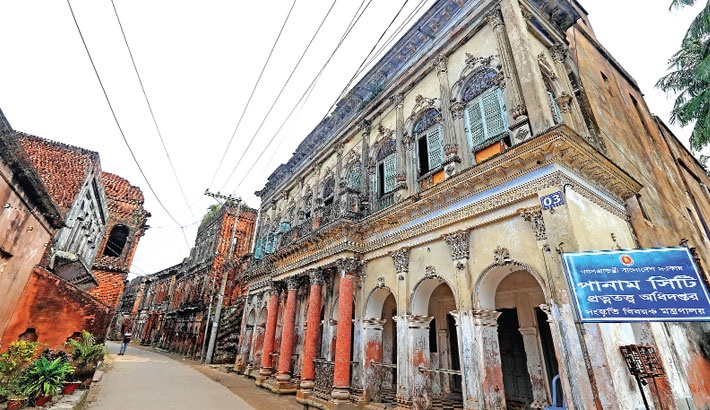 The majestic signs are still evident in the red bricks of the ancient walls and the terracotta works on the black stones of the dilapidated buildings of Panam Nagar.

They also carry the rich history of the capital of Eastern Bengal which was once an important trading centre for amazing textiles like muslin.

A Hindu king named Danauja Rai established his kingdom in the area with Subarnagram as his capital in the late thirteenth century.

The most glorious phase of Panam Nagar began in 1338 when it was made the capital of the independent Sultanate of Bengal founded by Fakhruddin Mubarak Shah.

It was a long time capital of the Kingdom of Bhati under the house of Isa Khan as well.

Till 1610, the city remained an important centre of trade and politics until Mughals had subdued the Baro-Bhuiyans (local chieftains) and preferred Dhaka as the capital of Bengal.

Once there were about 1400 families of weavers in and around Panam Nagar.

During the British period, East India Company founded a factory in the city to purchase muslin and cotton fabrics.

Back then, many wealthy Hindu merchants of Kolkata, the then capital of colonial India, returned to their ancestral land and built a small township over an older ruined settlement.

The existing 52 buildings of the area were the residence of them which were constructed from early nineteenth to twentieth century.

Situated 37 kilometres away from Dhaka, the whole area of Panam Nagar contains of large ponds circled by brick walls. It also has a 600 metres long road.

The townhouses are Indo-Saracenic in design with influences of European architecture.

Panam Nagar is filled with nostalgia. It is a space packed with infinite wonders at how things change and how splendour of empires passes away.

The stunningly beautiful buildings are silent yet profoundly expressive. Watching them one can see, feel and connect to a population that have gone but whose traces are still visible.

But time has been taking its toll on these buildings, and the city is losing its grandeur.

The World Monument Fund declared Panam Nagar as one of the 100 ruinous historical establishments of the world in 2006.

Professor Mesbah Kamal of Department of History at the University of Dhaka said, “Hundreds of archaeological sites are excavated globally every year with separate structures. But finding a whole city full of rich archaeological establishments is a rare incident. Panam Nagar is a precious heritage site not only for Bangladesh but for the world.”

“I feel doubt about the presence of enough efficient people in our archaeology department who understand its value. Proper preservation of this great city and renovation of its buildings are essential to uphold our history,” he added.

In 2001, the Department of Archaeology took an initiative to carry out restoration on Panam Nagar. The buildings were freed from unauthorised occupation in 2009.

Back then the repair work on several buildings began but the attempts by applying layers of lime and brick dust destroyed the archaeological beauty of nine buildings. The substandard repairs were finally put on hold after stiff opposition from locals and experts.

However, a Korean company named Youngone Corporation in 2016 expressed its interest to fund and execute the restoration work of Panam Nagar though then the archaeology department did not sign a contract with them due to disagreement on some issues.

Later, an Indian research team also wanted to provide technical assistance regarding renovation of the buildings but it also did not work.

When asked about the latest development of the renovation plan of Panam Nagar, Rakhi Roy, regional director (Dhaka division) of the Department of Archaeology, said, “We have formed a committee of experts and taken a pilot project to renovate a building of the area. Our next step will depend on the consequence of this project.”

Meanwhile, Panam Nagar keeps losing its appeal due to indecisions and plodding approach of the Department of Archaeology.

It may not be possible to preserve this outstanding heritage site without swift restoration work.