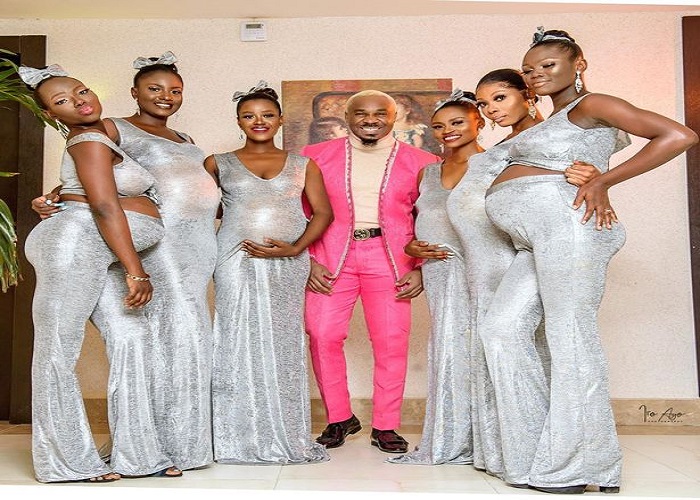 When at a wedding, you'd hope all eyes were on the bride and groom and that nothing was detracting from their special moment.

But following Nollywood actor Williams Uchemba and his wife Brunella Oscar's big day, all people seem to be able to talk about is one of their guests.

It seems Mike Eze-Nwalie Nwogu, a nightclub owner from Nigeria, may have stolen some of their spotlight after he arrived at the ceremony with six pregnant women on his arm.

Mike, who is known as Pretty Mike on social media, claims he's the father of all six unborn children and rocked up at the wedding in a hot pink collarless suit.
All of the women who joined him also looked stunning in matching silver outfits, some wearing dresses, others in crop tops and trousers.

Mike shared a video on Instagram of them all together in their wedding attire, in which he kisses each of their baby bumps in turn.

He captioned the post: "PM and his six Baby Mothers to be… no film trick, we are just living our best life. #ABetterTime #HappyHome #Familyiseverything #babybum."

The post garnered a mixed response from his followers, with some accusing him of upstaging the happy couple and others in awe of him.
One person replied: "Pretty Mike turned up at Williams Uchemba's wedding with six pregnant women. He was there at the door rubbing their belly.

"This is one reason I must have heavy military presence at my wedding venue. You'll not come and chase clout on my special day."

Another said: "Just when I thought I've seen it all!"
Someone else branded him "Mr Controversial", while another proclaimed her was the "ovaries overlord"

A different user simply called him "Zaddddddyyyyyy".
Back in 2017, he caused outrage after arriving at a wedding with two women that he walked on leashes as if they were dogs, reports Daily Post Nigeria.

People compared these antics to his latest stunt at the celebrity wedding, calling it the "same madness".