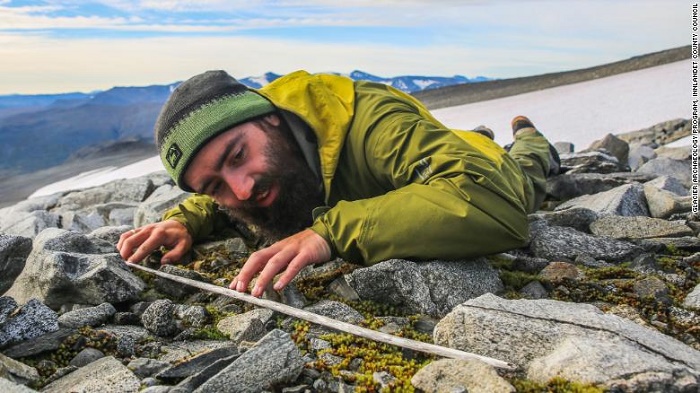 Archaeologists have uncovered a haul of ancient artifacts from a melted ice patch in Norway, including a record number of arrows used for reindeer hunting from more than 6,000 years ago.

The team found 68 arrows at the Langfonne ice patch in the Jotunheimen Mountains, tracing the artifacts back to various periods of time across thousands of years, from the Stone Age all the way through to the Medieval Period.

The discovery, published this week as a study in The Holocene journal, also included the remains of reindeer antlers, Iron Age scaring sticks used in reindeer hunting and a 3,300-year-old shoe from the Bronze Age. The arrows mark the earliest ice finds in Northern Europe, according to the study's authors.

Norway's Jotunheimen Mountains are located more than 200 miles (in excess of 320 kilometers) north of the capital, Oslo.

The Langfonne ice patch, where the arrows were found, has retreated by more than 70% over the past two decades as global warming has caused dramatic ice melt, the study says.

"With the ice now retreating due to climate change, the evidence for ancient hunting at Langfonne is reappearing from what is in essence a frozen archive," said Lars Pilø, the study's lead author and an archaeologist from the Innlandet County Council, in a statement.

"The ice melt, sad as it is, provides an unprecedented archaeological opportunity for new knowledge."

The oldest arrows, dating back to 4000 BC, are in poor condition. But surprisingly, the arrows from the Late Neolithic period (2400-1750 BC) were better preserved in comparison to those from the following 2,000 years, according to the study.

Using ground penetrating radar (GPR) technology, researchers believe that the bad state of the oldest arrows may be due to ice movement.

GPR data revealed ice deformation deep inside of the patch may have broken the old, brittle arrows, but it also helped to bring them to the surface to be discovered.

"Ice patches are not your regular archaeological sites," Pilø said. "Glacial archeology has the potential to transform our understanding of human activity in the high mountains and beyond."