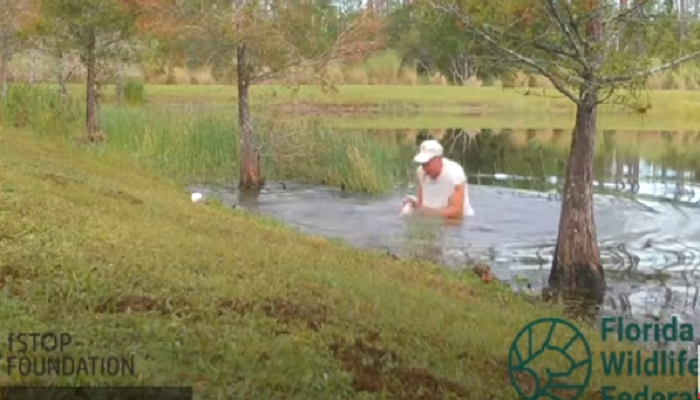 A 74-year-old man leaped into a Florida pond and wrestled open the jaws of an alligator that lunged from the water to attack his 3-month-old puppy.

The rescue last month was captured on video by cameras placed in the area to document wildlife. Florida Wildlife Federation workers discovered the attack when they checked the camera’s memory card last week, according to the agency’s regional policy director, Meredith Budd.

Richard Wilbanks told the News Press he was walking Gunner, a Cavalier King Charles spaniel, along the pond’s shoreline near his home in the southwestern Florida village of Estero on Oct. 25 when a 4-foot (1.2-meter) gator lunged from the water and grabbed the dog.

Wilbanks jumped into the water and pried open the gator’s jaws, freeing the frightened puppy.

“It was like a missile,” Wilbanks told the newspaper. “We were only about 3 feet away from it, but it struck like a snake. It had Gunner in a vise grip and I just rushed in.”

The video shows Wilbanks wrestling with the gator at the water’s edge.

The attack left both Wilbanks and Gunner bleeding. Wilbanks and his wife took Gunner to an animal hospital where doctors found a puncture wound. He said X-rays showed only some water in the lungs, and the puppy stayed at the hospital for a few days to recover.

The cameras in the Wilbanks’ neighborhood are part of a partnership between the Florida Wildlife Federation and the fSTOP Foundation, Budd said.

There are 17 cameras across 15 properties in Estero as part of what the two foundations call Sharing the Landscape. Workers periodically check the memory cards, which only hold a certain number of images. The cameras typically capture videos of deer and bobcats, she said.

“We don’t just want to tolerate wildlife, but, rather, we want to thrive with wildlife on a shared landscape,” Budd said.

The goal of the project is for homeowners who live in and around nature to understand the value of wildlife, she said.

“While this video was shocking and I’m glad everyone was OK, I’m glad it’s a learning opportunity for the importance of respecting wildlife and taking precautions to make sure this doesn’t happen to anyone else.”