Social Engineering in Tibet: Legitimizing CCP’s selection of the next Dalai Lama 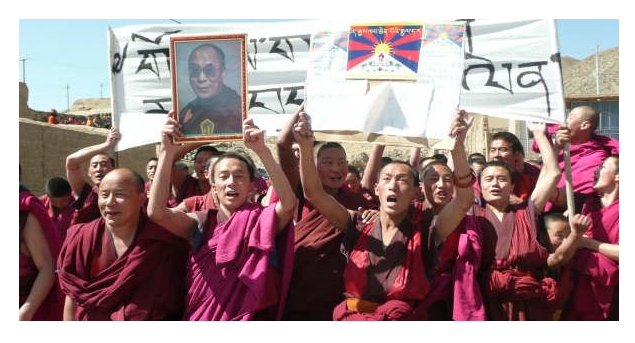 After Mao, Xi Jinping is oft considered as the most powerful leader since his accession to the General Secretary position in the Chinese Communist Party in 2012, according to Human Rights Watch, he has “started a broad and sustained offensive on human rights“.

Under his leadership, the CCP’s unfolding blueprint in Xinjiang and Tibet has increasingly come under international scrutiny, wherein he launched “the people’s war on terror” in 2014, which involved the forced detention and re-education of ethnic Uyghur Muslims. In Tibet, Xi emphasised on the need to educate the public to fight against separatism to “form an impregnable fortress in maintaining stability” and strengthen the unity of all ethnic groups in Tibet().

These policies have been seen as an attempt to sinicize these autonomous areas to ensure “cultural unity” or what international Human Rights agencies dub as a form of “cultural genocide”. The Dalai Lama himself pointed to the anachronistic nature of these policies as they never had the voluntary consent of the Tibetan people.

Xi’s rationale is centred on his fixation with territorial integrity seeing the different cultural practices of Tibet and their continued veneration and obedience to the Dalai Lama as threats to the internal security of China. Subsequently, under Xi, there has been a marked attempt to curtail religious and cultural freedoms whilst implementing a thorough securitisation of the region to root out suspected “splittists” and “saboteurs”.

The principal architect of Xi’s Tibet policy has been Chen Quanguo, who held the position of Communist Party Secretary of Tibet Autonomous Region from 2011-2016. During this period, Chen oversaw significant security reforms, introducing convenience police stations, which divided urban centres into grids allowing the authorities to maintain effective surveillance over the urban populace. These reforms have led Tibetan activist Kelsang Dolma to dub Tibet as China’s first laboratory of repression, with Chen’s policy of “double-linked households” in which family members are encouraged to report one another to authorities at any hint of transgression.

The result of these Orwellian policies has directly affected the personal freedoms of Tibet’s populace, wherein surveillance programmes like the  “Benefit the Masses”, which deploys over 20,000  personnel to Tibet to monitor residents. As a consequence, protests did break out but went unreported.  Even self-harming dissent in Tibet –consisting of self-immolation – faced repression.   Since 2012, these “intentional homicides” have been responded to by severe prison and even death sentences to those abetting the act, with regulations permitting authorities to extend these punishments to the martyr’s family and even their village.

Post Chen (who was appointed as Communist Party Secretary of Xinjiang in 2016), there has been little respite for the Tibetan populace. A recent development has been regulations on “ethnic unity” adopted by the Tibetan Autonomous Region People’s Congress on January 11, 2020. The regulations depart from the principle of “preferential treatment”, which was supposed to guarantee Tibetan culture and traditional ways of life. Observers pointed towards the similarities of the regulations to the ones used to justify the oppressive crackdown against Uyghurs.

The new law requires equal participation by non-Tibetan ethnic groups at all levels of government, besides in schools, private business companies, religious centres, and in the military. Sophie Richardson— the China Director at Human Rights Watch –  observed how the policy to “mandate ethnic unity” is a “clear violation of international human rights norms” and in “clear violation of China’s international obligations”.

The new law is being seen as a  means to dilute Tibetan culture by subduing it beneath the dominant Han culture. The law introduces a series of punishments without specifying what constitutes a disruption of ethnic unity. “As such, this can mean that in the future, anyone discussing the preservation of Tibetan culture, language and Tibetan unity can also be punished or disciplined for disrupting national unity“.

Matteo Mecacci (President of the International Campaign for Tibet) has said, “if Tibetans benefited as much from Chinese leadership as Xi and other officials claim, then China wouldn’t have to fear separatism and wouldn’t need to subject Tibetans to political re-education.” This paints a picture which has been increasingly common in Xi’s China; that freedom of cultural expression is considered a direct threat to the state’s socio-political identity, which is a carefully engineered top-down exercise since the Maoist revolution. Since 1950, Beijing has consistently introduced measures to curb and control the Tibetan Buddhist system.

Before 2000, this was most evidently seen in the controversy surrounding the 11th Panchen Lama, whose succession was hijacked. After being recognised by the current Dalai Lama in 1995, he was taken into custody and has not been seen since. Monks were subsequently instructed to accept the legitimacy of Gyaincain Norbu, the state-appointed Panchen Lama, thus providing the Chinese administration control over one of the pillars of the Tibetan Buddhist system.

This attempt to control the religious authority of Tibetan Buddhism has only accelerated under Xi, who stated that Tibetan Buddhism had to “adapt to socialism and Chinese conditions”. This is akin to the Chinese government’s claim of introducing “Islam with Chinese characteristics” in Xinjiang. These “Chinese conditions” would include replacing the Tibetan Language with Mandarin in schools, the forcible removal of photos of the Dalai Lama to be replaced with photos of Xi Jinping in residential spaces. As a result, International human rights organisations are in consensus that the situation has become worse under Xi.

All these efforts are tied to China’s quest to control the Dalai Lama’s succession.  Beijing made an early head start in its efforts to thrust upon its legitimacy by the time it handpicks its candidate for the next Dalai Lama.

It is clear, therefore, that since Xi acceded to power in 2012, there has been a more concerted effort on the part of the PRC to suppress Tibetan culture and cement its control over the religious apparatus of the region. The rationale being to not only ensure internal stability but also as a means to gain legitimacy towards a more culturally unified China, ensuring the seeds of loving china are planted in the depths of hearts of every youth.