Does the Oxford vaccine contain parts of a fetus? 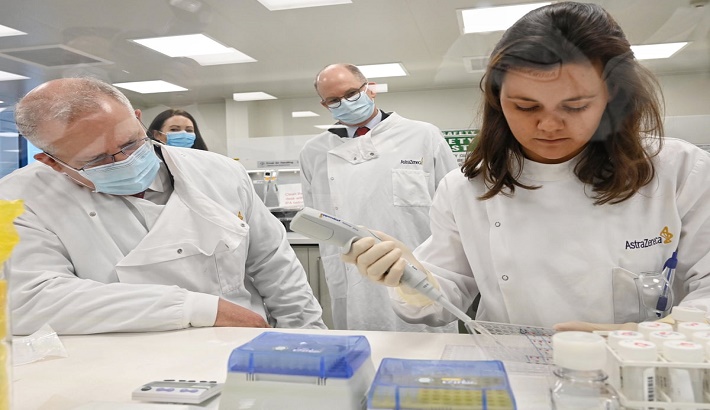 Oxford-Astrazeneca's vaccine is one of the most exciting and promising COVID-19 vaccines we have in front of us right now. Phase III trials are about to wrap up for the same. As per early observation studies, the vaccine carries a 70% vaccine efficacy, which is expected to go up when we have more data from the trials.

To be marketed as 'Covishield' in India, it has also been reported that we could have 100 million doses ready for emergent use by January, which is exciting news.

The Oxford-Astrazeneca backed novel coronavirus vaccine, which is made using a non-replicating version of the virus has been surrounded by controversies ever since it headed to trials. One of the participants also developed a 'mysterious' disease with the jab. Now, there are also some claims floating around the internet, which suggest that the vaccine makes use of 'aborted male fetus' in its make.

Here's what the claim suggests

According to a social media page, 'We are vaxxed', which advocates against vaccination, a video showcases how the vaccine AZD-1222 contains a particular cell culture which is extracted from lung tissues obtained from a 14-week fetus.

A part of the video reads, "CONFIRMED- aborted Male fetus in Covid 19 vaccine,". The video itself has been deleted from the internet now.

Another version of the video also demonstrates the medical 'research' done by one of the narrators to support the claim. It has been viewed over a million times and has been shared by over 1,00,000 people on the internet.

But, is it any true? Time to bust the myth!

While vaccines make use of peculiar ingredients, which are sometimes hard to procure (also one of the reasons why developing and administrating vaccines is a costly affair), none of the vaccines makes use of human body parts, let alone an aborted baby fetus.

Not just that, the narrator's claim of the vaccine making use of particular cell lines is also a big lie. According to experts, vaccines are made using a cloned version of human cells, which is a common process which doesn't hurt or harm humans.

Some of the cell lines used in the making of the Oxford vaccine have also been used to develop widely-successful hepatitis, chickenpox and measles vaccines, which have been used for years and serve no side-effects.

A spokesperson for Oxford-Astrazeneca also confirmed to an international news agency, Politifact that the experimental vaccine doesn't make use of MRC-5 cell line, as suggested by the anti-vaxxers in the video.

In fact, what's more interesting to know is that the Oxford vaccine has been developed using a modified strain of a common cold-causing virus and is largely traditional and 'safe' to use. Upon inoculation, it would 'train' our immune system to easily identify cells which would have been infected by a novel coronavirus.

Hence, we must quash any misleading rumours or myths which hinder the purpose of vaccination. Vaccine hesitancy will also add to our fears and make our battle against COVID-19 a longer one.