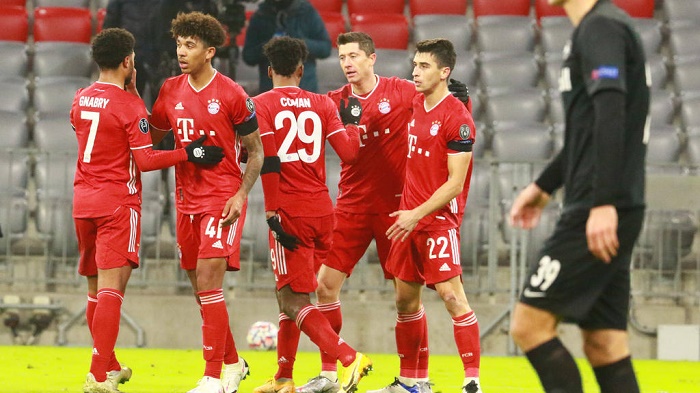 Holders Bayern Munich booked their place in the Champions League last 16 on Wednesday as Robert Lewandowski claimed his 71st goal in the competition in a 3-1 home win over Salzburg.

Lewandowski scored just before the break at the Allianz Arena to draw level with Real Madrid great Raul in third on the Champions League list of top goalscorers.

Only Cristiano Ronaldo, who has netted 131 times, and Lionel Messi with 118 goals, have scored more than Poland star Lewandowski.

Bayern earned their 15th straight Champions League win to qualify for the knock-out stage as Group A winners, as second-placed Atletico Madrid drew 0-0 with Lokomotiv Moscow.

Bayern doubled their lead just after the break when Kingsley Coman's shot deflected in off Salzburg defender Maximilian Woeber.

Leroy Sane claimed their third goal just after Bayern were reduced to 10 men when midfielder Marc Roca was sent off on his Champions League debut.

Salzburg pulled a goal back when forward Mergim Berisha got in behind the Bayern defence to net on 73 minutes.

With Bayern defenders Niklas Suele and Lucas Hernandez sidelined, US international Chris Richards made his Champions League debut at left-back.

Roca lasted just over an hour on only his third appearance since joining from Espanyol in October.

The European champions won 6-2 when the sides met in Austria at the start of November when Bayern scored four late goals.

Just as they had done at home, Salzburg made a bright start and Hungarian rising star Dominik Szoboszlai wasted a golden chance in the 35th minute when he shot over with the goal at his mercy.

Just as they had in Saturday's 1-1 Bundesliga draw at home to Werder Bremen, Bayern laboured early on, but did not waste the first chance which came their way.

When Thomas Mueller's shot was only parried by Salzburg goalkeeper Cican Stankovic, Lewandowski was on hand to turn in the rebound on 43 minutes.

It was 2-0 seven minutes just after the break when Leon Goretkza won the ball and passed to Coman, who beat a defender and fired in a speculative shot which took a wicked deflection off Woeber's boot.

Having already been booked for an earlier foul on Zlatko Junuzovic, Roca was dismissed on 66 minutes for a late challenge on the Salzburg midfielder.

It made little difference as Bayern grabbed their third goal when Sane powered home a header from Coman's cross.

Sane was at fault for Salzburg's consolation when he gave the ball away in his own half which led to Berisha getting in behind the defence.