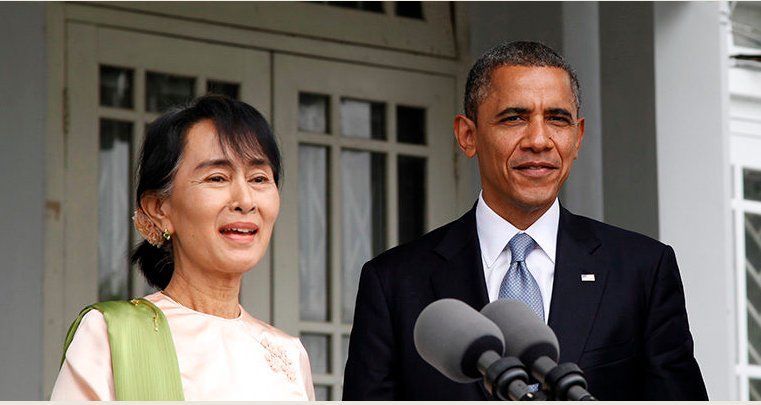 Before the November election, Myanmar received three high-level visits from China, Japan and India. In October, a US trade delegation also visited, meeting State Counselor Daw Aung San Suu Kyi and senior ministers. The US delegation said it hoped to boost post-coronavirus investment in the country and increase reengagement with Myanmar, given its strategic location.

The good news is that Myanmar is no longer an isolated nation, and its foreign policy should be more pro-active under the NLD government during its second term. In its 2015 manifesto, the NLD pledged to pursue “an active and independent foreign policy, and to establish friendly and close political relations” with other nations.

Indeed, the instability in Rakhine State and the government’s uneasy and volatile working relationship with the military have posed impediments to and limitations on Myanmar’s foreign policy. But one must remain cautiously optimistic that Myanmar will see increasing stability in the coming years.

Relations with some Western countries soured under the NLD government’s first term, due to the Rohingya issue. As expected, China came to the rescue of Myanmar, providing much needed diplomatic coverage and backing Myanmar on the UN Security Council (UNSC). Myanmar, after all, was the first non-communist country to recognize the communist-led People’s Republic of China after its foundation in 1949 and supported China’s membership in the UN.
Complex relationship

Chinese President Xi Jinping paid an official visit to Myanmar in January to mark the 70th anniversary of the establishment of diplomatic ties between two countries.

Xi sent a congratulatory letter to the ruling NLD on its landslide victory in the Nov. 8 election and urged State Counselor Daw Aung San Suu Kyi to boost practical cooperation on his ambitious grand infrastructure scheme, the Belt and Road Initiative (BRI), in the country.

Despite several efforts by China to begin implementation of backbone projects such as the China-Myanmar Economic Corridor (CMEC), the China-Myanmar Border Economic Cooperation Zone, and a special economic zone (SEZ) in Rakhine State, none of the CMEC projects has actually gotten off the ground so far under the current NLD administration. The government continues to take a cautious approach to the projects, saying it has been carefully reviewing them to ensure they are commercially viable and in line with country’s development plan.

Additionally, the question of China’s relations with ethnic insurgents along the country’s shared border remains a sensitive one.

Despite these issues, however, Myanmar remains heavily dependent upon China.
Neighborly ties

Under the NLD, the goal of Myanmar’s foreign policy has been to forge friendly relations with neighboring countries, as well as those further afield. Daw Aung San Suu Kyi once said that “ties between neighbors are always more delicate than those between countries far apart.”

Under the NLD, Myanmar as a member of ASEAN has developed stable and positive relations with Japan, South Korea, India and China.

New Delhi’s Act East policy is important to Myanmar, with its aim of strengthening relations with Southeast Asia and the greater Asia-Pacific region. Over the past decade, the government and military have made progress on cultivating closer ties with New Delhi. Myanmar leaders do appreciate New Delhi’s understanding and pragmatism in Myanmar. The two countries’ armed forces have stepped up cooperation on border security and counterinsurgency operations.

Notably, Myanmar also enjoys stable relations with Thailand; in the past, rebels and the exile community established bases along the border, and long-running border skirmishes destabilized the bilateral relationship.

This year, Thai security authorities have informed ethnic insurgent leaders they will not tolerate activities opposed to the Myanmar government on Thai soil. However, Thailand continues to host peace meetings between Myanmar authorities and ethnic insurgents in its northern city of Chiang Mai, and hundreds of thousands of Karen, Karenni and Shan refugees live in camps in Thailand.

Myanmar’s pivot toward ASEAN could be strengthened. Recently, the country joined China, Japan and 12 other nations in forming the world’s largest free trade zone—accounting for about 30 percent of global GDP—hoping the deal will boost trade by drawing investment to the region, expand local SMEs’ access to global manufacturing networks and support the country’s post-COVID-19 economic recovery.

The accord aims to liberalize trade and investment across the Asia-Pacific region by removing and reducing tariffs, especially on industrial and agricultural products, and setting out new rules on government procurement, competition policy, e-commerce, trade, data transmission and intellectual property.

Myanmar State Counselor Daw Aung San Suu Kyi, who witnessed the virtual signing ceremony for the RCEP, said, “The landmark trade pact will serve as a strong signal to the world that we are committed to maintaining the credibility of regional cooperation architecture, retaining the trust of the business community and contributing to the regional economic recovery.”
Rohingya issue: thorn in Myanmar’s side

Myanmar will continue to face criticism on the Rohingya issue, which will likely continue to hijack relations with some Western governments including the incoming Biden administration in the US.

However, it was a Democratic administration, under President Barack Obama, that embraced Myanmar’s political opening and reform process; Obama visited Myanmar twice. Unfolding on its doorstep, this rapid fostering of relations between Myanmar and the US surprised and upset China. We saw the rise of Western influence, while China’s declined. But Myanmar’s strategic realignment has its ups and downs.

We began to see China-backed ethnic insurgents become active again along the border, with serious fighting breaking out with the Myanmar military.

Ethnic armed groups in the north along the Chinese border are deeply in the pocket of China. These ethnic rebels are China’s bargaining chip against Myanmar. If Beijing is upset with Naypyitaw, it can unleash an armed insurgency and create instability inside Myanmar.

But then, as relations between Myanmar and some Western governments soured over the Rohingya issue, we saw China steadily step in and expand its power and influence over Myanmar. Beijing continues to increase its sway among ethnic armed groups in the north and support rebels in Rakhine and along the India-Myanmar border.

Myanmar is a weak state, and since the 1950s a neutral and independent foreign policy has been maintained; no government has made a drastic turn away from the policy, even under Daw Aung San Suu Kyi.

Thus, China’s shadow looms over Myanmar’s foreign policy challenges and its realignment of relations with old and new friends. The question is how to handle China, which shares a border of over 2,000 km with Myanmar.

Indeed, Myanmar government and military officials alike should expect troubled ties with China and another neighbor, Bangladesh. Rohingya refugees live in camps in Bangladesh’s Cox’s Bazar district, and insurgents and terrorists are believed to have established bases inside Bangladesh.

At the UN General Assembly in September, U Kyaw Tint Swe, Myanmar’s minister for the office of State Counselor Daw Aung San Suu Kyi, hit out at Bangladesh, blaming the stalled repatriation of Rohingya Muslims on Dhaka’s failure to crack down on a militant group and its supporters, who are actively trying to sabotage the process.

Importantly, we should not forget Japan’s role in supporting the peace process in Myanmar.

Japan has had an increasingly positive influence in Myanmar. In a recent interview with The Irrawaddy, Ambassador Ichiro Maruyama explained the Japanese special envoy’s mediation role between Myanmar authorities and the Arakan Army (AA).

China similarly promised to broker peace between ethnic armed groups and the Myanmar government and military, but lately Beijing has been absent from this role.

Unlike his Western counterparts, Ambassador Maruyama was eager to inject some constructive comment into the discussion of the Rakhine issue, saying, “The Japanese government has always understood that there is a historical issue in Rakhine State. It is a very complex situation, so no one can solve it immediately.”

Myanmar people, including some stakeholders in the peace process, generally regard Japan with less wariness than they do China.

On the subject of Myanmar’s relations with China and Japan, Daw Aung San Suu Kyi once said, “We see China as a friend, as we see Japan as a friend. And I think it is not right to make people choose between friends.”

Nevertheless, it is interesting to note that both the government and military have been openly critical of China’s growing influence in the country and its arming of ethnic rebels along the border.
If the West pushes Myanmar on the Rohingya issue, Myanmar will inevitably seek China’s protection, and be pushed into its orbit.

Therefore, Myanmar and Western governments will have to find common ground and a pragmatic approach to resolve sensitive issues in Myanmar, including those involving the Rohingya. It is important that the West listens to many voices from Myanmar and appreciates the nuances in the country, and not just listen to the handful of groups looking to profit from the Rohingya’s plight and those from the human rights industry. No one should condone human rights violations or maltreatment under any armed group.

Under the Biden administration, Myanmar should seek opportunities to engage with the US.

In discussions of the Indo-Pacific, Biden has introduced a subtle shift in language: instead of using the phrase “free and open” to describe Washington’s intentions for the region, Biden has employed the formulation “secure and prosperous”.

Under President Donald Trump, some pundits have criticized the US as an unreliable partner with an anti-globalist viewpoint, but under his successor we will see a return to multilateralism, the liberal order and a promotion of “American values”. If it is to be in effect a “third term” of the Obama presidency, we should expect a return to normalcy. Under Trump, we didn’t hear about democracy and human rights in Myanmar, or statements expressing “concern”, but it is important to keep reminding the military and armed groups to be sensitive and to respect human rights and democratic principles. We can expect to hear from the Biden administration on this front.

Ironically, we may well come to miss the Trump era, at least when it comes to his administration’s treatment of China. In the region, some countries including Myanmar have enjoyed or benefited from Trump’s anti-China policy.

As a small and weak neighbor of China, we should wait to see how Beijing tests Biden’s policy in the early days of his administration. Countries in the region will feel the effects immediately, and Myanmar should be ready for all possible scenarios.

Looking ahead, Myanmar will need to be more pro-active in engaging and expanding its relations with ASEAN, other Asian countries and the West, continuing to demonstrate its independence as a sovereign state while broadening economic and diplomatic cooperation.