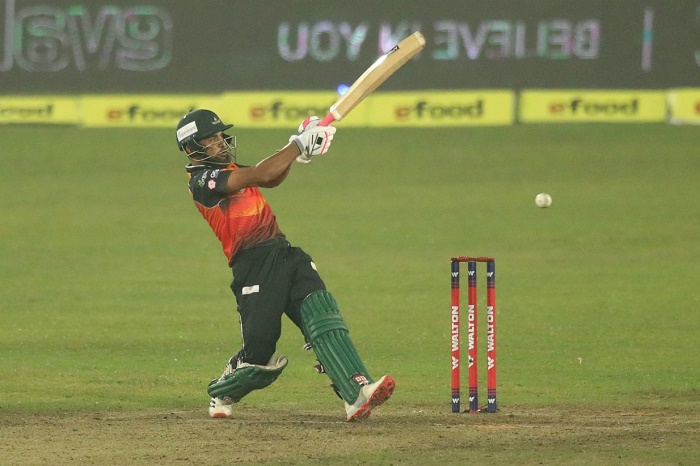 Gemcon Khulna secured a four-wicket victory over Fortune Barishal in the second match of the Bangabandhu T20 Cup at the Sher-e-Bangla National Stadium on Tuesday.

Replying to Barishal’s 152, Khulna needed 29 runs in the last 12 balls. Shaidul Islam and Ariful only managed seven runs from the 19th over bowled by Taskin Ahmed. In the last over, they needed 22 runs to win the game.

Ariful struck two sixes off first two balls over the long-on area. He declined a single in the third ball. And in the four and fifth ball, he smashed two more sixes, and this time over the mid-wicket area, which has ensured a win for Khulna.

Ariful remained unbeaten for 48 off 34 balls. Before scoring 24 runs off the last five balls of the match, Ariful were at 24 off 29 balls.

Before Ariful’s upturn, top-order of Khulna displayed disappointing batting performance. The openers, Anamul Haque (4) and Imrul Kayes (0) failed to help the team at the top of the order while Shakib Al Hasan (15) and captain Mahmudullah Riyad (17) failed to go on riding on their solid start.

After losing four wickets for 36 runs, Khulan were stuttering in the middle. But in the fifth wicket stand, Jahurul Islam (31) and Shamim Hossain (26) added 42 runs to keep their team alive in the race.

But, while posting 122 on the board, both of Jahurul and Shamim returned to the dressing room. The onus was on Shaidul and Ariful to score the remaining 32 runs to seal the game, and they did it in style.

For Barishal, the pace-bowling duo- Taskin Ahmed and Sumon Khan- bagged two wickets each while Mehidy and Kamrul Islam Rabbi took one wicket each.

Earlier, Barishal posted 152 runs for 9 wickets in 20 overs. Parvez Hossain Emon, the member of Bangladesh’s U-19 World Cup-winning team, hit 51 off 42 with three fours and four sixes. His U-19 teammate Towhid Hridoy was the second-highest runs scorer for Barishal posting 27 while Mahidul Islam Ankon scored 21. Tamim Iqbal (15), Afif Hossain (2) and Irfaan Shukkur (11) failed to well in this game. They eventually, ended up on 151 for 9.