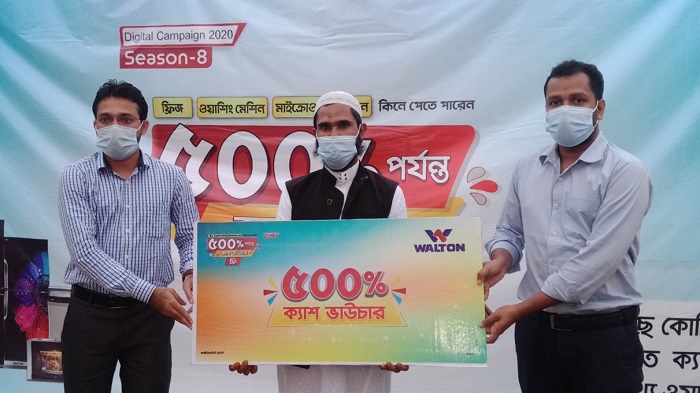 Three more customers in Dhaka and Brahmanbaria got cash vouchers worth of 500 percent of the price of Walton fridge they had purchased under the local brand’s nationwide ongoing ‘Digital Campaign Season-8,’ commenced across the country with promising a wide range of benefits for customers.

They were: Kabir Ahmed of Brahmanbaria’s Sadar Upazila, Akram Uddin Siddique and Faisal Kabir of the capital’s Khilgaon and Maghbazar areas respectively.

From October 1 this year, customer are enjoying either cash vouchers of up to 500 percent of the value of the purchased product or free appliances such as refrigerator, air conditioner, television etc. upon the purchase of a Walton refrigerator, washing machine or microwave oven from any Walton Plaza or distributor outlet as per the promising benefits in the nationwide ongoing Digital Campaign Season-8,

On November 2, Akram Uddin Siddique, sales manager of a private company, purchased a Tk 64,900 worth digital display’s side by side door model of non-frost refrigerator from Walton Plaza Kilgaon branch.

On the same day, a government’s official named Faisal Kabir purchased a refrigerator at cost of Tk 28,900 from Walton Plaza Bangla Motor Branch in the capital on the same date.

Each of them was awarded 500 percent cash vouchers upon their respective purchases of Walton fridge under the campaigns Season -8 benefits.

Earlier on November 18, 2020 (Wednesday), 500% cash voucher was also handed over to Kabir Ahmed at a programme held at M/S Amin Electronics, one the of the distributors’ showrooms of Walton at Budhal Bazar in Brahmanbaria. Upazila Parishad Chairman Firojur Rahman handed over the voucher to him.

The government official Faisal Kabir, who got married recently, used his cash voucher to buy a Walton laptop, TV, rice cooker, iron and some other appliances, along with one more refrigerator.

Walton has been conducting digital campaign across the country aimed to deliver the customer best after sales services swiftly through online automation. To encourage the customers’ participation in the campaign, they offered wide ranges of benefits for customers.

At present, Walton is manufacturing and marketing more than 100 models of fridge, including frost and non-frost refrigerator, freezer and beverage cooler. Prices of these Walton fridge are between Tk 10,990 and Tk 80,900. Walton is giving one-year replacement guaranty as well as 12 years compressor’s guaranty.