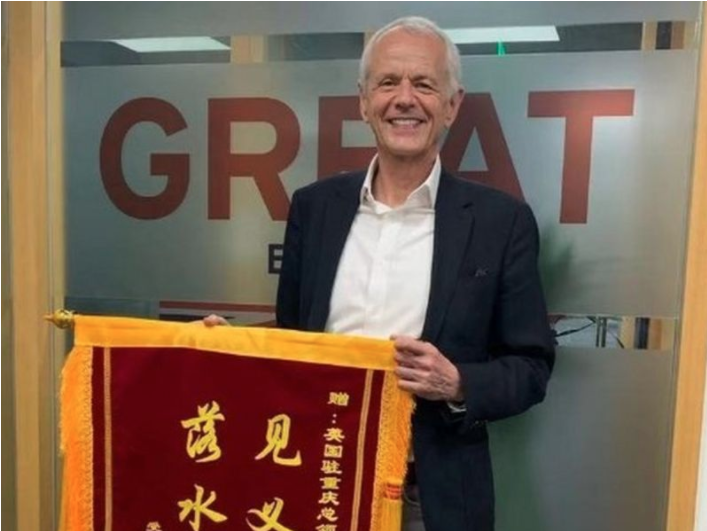 A British diplomat who dived into a river to save a woman's life has been presented with a red velvet banner - a sign of gratitude in China.

The banner was given to Stephen Ellison, consul-general in Chongqing, by the 24-year-old university student he pulled from the river last week.

It reads "righteous and courageous, saving people from water".

The 61-year-old was met with widespread praise and was hailed as a hero in China for his actions.

"This is the first banner I have ever received in my life, it is of great significance to me," Mr Ellison said, according to a post by the British Consulate General Chongqing on China's micro-blogging site Weibo last Friday.

Big red banners, known in China as jinqi, are typically given as a means of expressing gratitude - and it is not uncommon for the recipient to display it, like one would an award.
Mr Ellison, originally from Newcastle, is head of the British mission in Chongqing, where his role is primarily to support bilateral trade links between Britain and China.

However, it was his bravery rather than his profession which thrust him into the spotlight, after he was filmed jumping into a river to rescue the unnamed woman who had slipped into the water from some rocks.

The footage shows her struggle and disappear under a footbridge before emerging face down - apparently unconscious.

Mr Ellison is seen throwing off his shoes before launching into the water himself, turning her over and bringing her to safety.

He then swam round to shallower rocks and climbed out.