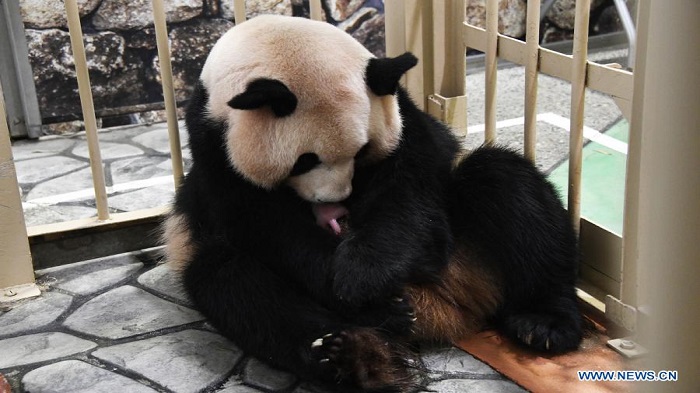 A male giant panda cub has been born at a zoo in Western Japan's Wakayama Prefecture, local media reported Monday.

The Adventure World theme park in the town of Shirahama said that its female giant panda Rauhin gave birth to the male cub on Sunday, her first delivery in two years.

The baby panda and his 20-year-old mother are both in good health, officials of the facility said.

Born at about noon on Sunday, the cub measured 20.5 centimeters long, and weighed 157 grams. It was the 17th cub delivered at the zoo.

The newborn's father, 28-year-old Eimei, was said to be in his 80s in human terms and broke his own world record of being the oldest male giant panda in captivity that had a cub through natural breeding.

The cub is the 10th offspring between Eimei and Rauhin, and the first since they had Saihin, a female giant panda, in August 2018.

Due to the COVID-19 outbreak, the Chinese researchers who had visited Japan during earlier deliveries could not make it this time, making it the first time that a panda had been born under the supervision of only Japanese staff.

"Although we had worries, we're relieved to be able to announce the happy news. I'd like the cub to grow into a panda that can brighten up the hearts of many people," zoo director Koji Imazu said.