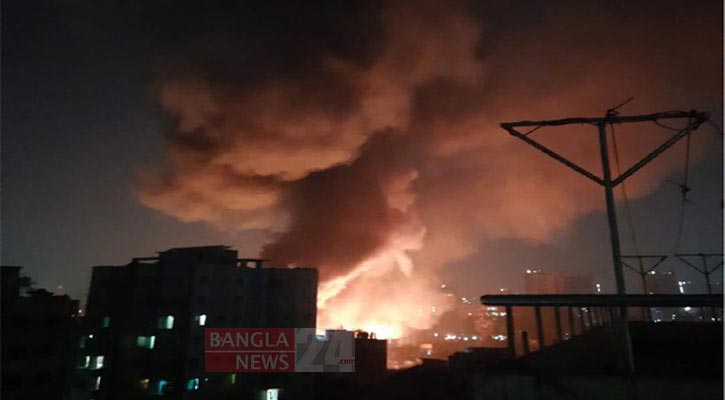 A teenager boy received burn injuries as a fire gutted over 100 shanties in a fire at ‘Sattola Bosti’ in Dhaka’s Mohakhali on late Monday night.

The injured is identified as Md Rakib Islam, 15, son of Yunus Ali, hailing from Matkala village in Hossainpur Thana of Kishoreganj.

He was admitted to Sheikh Hasina National Institute of Burn and Plastic Surgery (SHNIBPS).

The fire, which occurred at around 11:45pm, was brought under control at around 12:55am, Duty Officer of fire service headquarters control room Mahfus Riven said.

It took 12 firefighting units to extinguish the flame at around 2:55am, he said adding that at least 98 semi-pucca shanties and small makeshift shops were gutted in the incident.

The cause of the fire and extent of damage could not be known immediately. However, no casualty was reported, the fire service officer said.

Photos and footages from the site during the fire incident showed the area covered in thick black smoke as volunteers and firefighters scrambled to extinguish the pockets of flames.

Once the fire was put out, the scale of devastation started becoming clear.