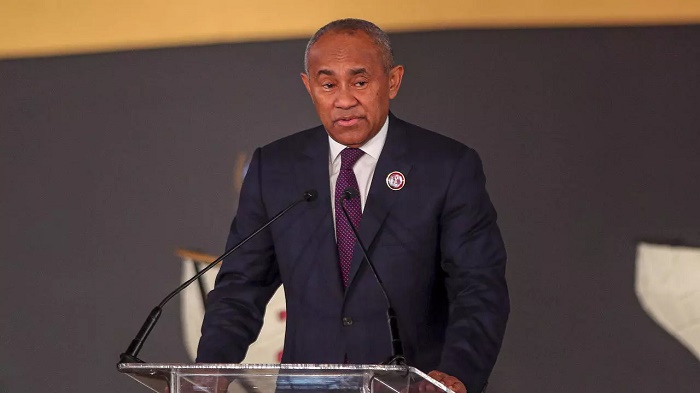 Ahmad Ahmad's reign as the head of African football looked to be over on Monday after FIFA hit him with a five-year suspension for corruption.

Ahmad, from Madagascar, has been president of the Confederation of African Football (CAF) since March 2017 but his announced bid for re-election in 2021 is now in doubt after FIFA banned him for "governance issues".

In their statement, FIFA said Ahmad had "breached his duty of loyalty, offered gifts and other benefits, mismanaged funds and abused his position as the CAF President".

Ahmad was also fined 200,000 Swiss francs ($220,000) by FIFA for the misdeeds, which related to "the organisation and financing of an Umrah pilgrimage to Mecca" and his involvement in CAF's dealings with a sports equipment company.

The 60-year-old, who last week stood down from his post for 20 days after testing positive for coronavirus, can appeal the ban "from all football-related activity" at the Court of Arbitration for Sport (CAS).

Ahmad, who was made a FIFA vice-president after being elected the head of CAF, had denied the accusations.

In response to his ban, CAF announced on Monday that Constant Omari's position as interim head of the body would be extended, without specifying for how long.

CAF said in a statement that the decision was made following FIFA's ruling, "which puts Mr. Ahmad Ahmad in a position of no longer being able to exercise his responsibilities".

Omari is president of the Congolese Football Federation and a member of the FIFA Council.

In April 2019, Ahmad was accused of a series of offences by former CAF official Amr Fahmy, who informed FIFA in a letter that Ahmad had paid bribes to directors, made personal use of CAF funds and sexually harassed a number of employees.

Two months later he was arrested in Paris while at the FIFA Congress ahead of that year's women's World Cup as part of a probe into corruption, but was released a day later without charge.

Ahmad's bid to remain head of CAF was being challenged by Augustin Senghor, the president of the Senegalese Football Federation.

Nyantakyi quit his positions as Ahmad's number two and president of Ghana's football association two years ago after being secretly filmed accepting a $65,000 bribe from journalists posing as businessmen who wanted to invest in Ghanaian football.

The official also agreed to a fictional sponsorship deal created by the reporters, which they told Nyantakyi would have funnelled millions of dollars designed for Ghanaian football to a company he runs.