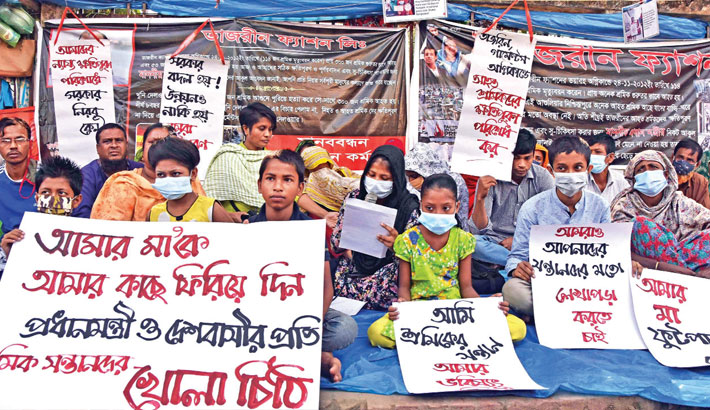 The eighth anniversary of the devastating Tazreen Fashions fire tragedy will be observed today (Tuesday), though the victims and their family members are yet to get justice in the cases filed over the industrial catastrophe.

The survivors and the families of the deceased workers are yet to get adequate compensation, treatment and rehabilitation facility as pledged by the authorities concerned eight years ago.

On November 24, 2012, a fire raged through Tazreen Fashions Limited in Ashulia, on the outskirts of the capital, killing at least 112 workers and injuring 200 others.

Expressing  frustrating over the delay in the trial, Joly Talukdar, general secretary of Garments Sramik Trade Union Kendra, told the Daily Sun: “We don’t know how much more time it will take to record the testimony of 104 witnesses and when the trial will complete and when the victims will get justice.” “The trial is struck as there is no headache of anybody in disposing of the cases,” the rights activist alleged, adding that Tazreen owner Delwar Hossain and others accused are enjoying free life where the workers are deceased families are stilling suffering.

Joly also said “The survivors are passing miserable lives with traumas. The victims are holding sit-in programmes in front of the National press club in Dhaka over the last 67 consecutive days demanding compensation, proper treatments and rehabilitation but no one is listening to them.”

According to the court sources, the cases are still pending with Dhaka First Additional District and Sessions Judges Court due to non-appearance of prosecution witnesses.

On September 3, 2015, the trial had started in the cases against 13 accused, including Tazreen factory owner Delwar Hossain and his wife and Tazreen’s Chairman Mahmuda Akhter.

All the accused were top officials and employees of the ready-made garment factory and they are leading free life after getting bail in the case.

Since the trial started in 2015 against the 13 accused, the court recorded depositions of only eight prosecution witnesses out of 104 in 42 hearing dates in the cases.

Talking to this correspondent, Chief Public Prosecutor Khandaker Abdul Mannan of Dhaka District and Sessions Judge Court said, “The trial is stuck due to non-appearance of witnesses. We are sending summons to the witnesses but they are not coming to the court even after issuing arrest warrants.”

“Besides, the trial remained halted for a long time this year due to the covid-19 pandemic,” the state lawyer said, adding, “We are trying our level best to complete the trial.”

BGMEA and foreign buyers, who were supposed to stand by the victims’ families with financial help, have done little in this regard.

The survivors of the fire incident are still passing miserable lives with their wounds. Sumi Aktar, one of the survivors who worked as sewing operator at 5th floor of Tazreen fashion, told Daily Sun “My husband died. I along with my daughter, widow mother and two siblings are passing a miserable life due to financial hardship.”

“The owner of the Tazreen did not pay any compensation till now. Many of the survivors of the factory are still jobless and cannot do anything due to disability caused by the accident,” she said.

Remembering the horrifying fire incident, another survivor Nasima Aktar, who was a sewing operator, at the fourth floor of the factory said: “Eight years have passed since the incident but the trial in the case yet to complete and the owner did not pay any single penny to us.”

Expressing frustration, sewing operator Jorina Aktar, another survivor, Daily Sun “Many had promised to ensure proper compensation after the incident but now all of them forgotten us.”

“The responsible factory officials are now enjoying free life where we are still suffering the trauma of the incident,” said Jorina urging the government to ensure justice, compensation, and their rehabilitation.

According to the charge sheet in the cases filed with Ashulia Police Station, Delwar and his wife constructed the Tazreen factory building with a faulty plan and illegally used its ground-floor walkway as a warehouse.

There was no fire exit in the factory though a provision of the labour law stipulates that there must be two exits in every factory, it said.

“The factory was built a mile away from the main road, making it very difficult for fire service vehicles to enter the factory compound,” according to the charge sheet.

Managers and security guards have been indicted in the fire cases as they asked the panicked workers get back to work when smoke was billowing from the spot.

Fire alarms rang as soon as the blaze broke out. Panicked workers tried to leave the factory before the fire spread. But, managers and security guards told them it was nothing serious said in the charge sheet.