4 MoUs likely to be signed during Bangladesh-India PMs’ talk: Momen 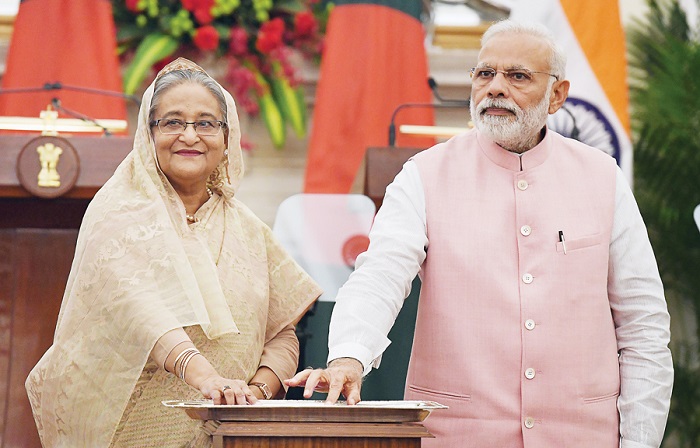 Four Memorandum of Understandings (MoUs) are likely to be signed during the upcoming virtual meeting of Prime Minister Sheikh Hasina with her Indian counterpart Narendra Modi next month.

“It is likely as many as four MoUs are to be signed during the virtual meet .. but the MoUs are yet to be finalized,” Foreign Minister Dr AK Abdul Momen told journalists on Monday.

After the meeting, the foreign minister said, the two premiers may also inaugurate some projects those have already been completed under the Indian Line of Credit (LoC).

The virtual summit between Prime Ministers of the two neighboring countries will take place in the third week of December, either on 16 or 17.

“We are thankful to India that their premier will talk to our honorable Prime Minister during our victory month as our victory is India’s victory as well,” he said.

Before the foreign ministerial level 6th Joint Consultative Commission (JCC) meeting in September last, Dr Momen had hinted that some bilateral agreements may be signed during the next meet of the two prime ministers.

The Indian premier was scheduled to visit this year to join birth centenary celebration of Father of the Nation Bangabandhu Sheikh Mujibur Rahman but the trip was cancelled due to COVID-19 pandemic.

The foreign minister said Dhaka had invited Narendra Modi to visit here in person on March 26 to join the nation’s celebration of the 50 years of the independence.

“We’ve invited him (Narendra Modi) and they accepted the invitation in principle,” he said as Bangladesh and India will celebrate Bangladesh’s 50 years of independence together next year.

Earlier, newly appointed Indian High Commissioner to Bangladesh Vikram Doraiswami assured that the virtual Hasina-Modi summit in December is not being seen as a substitute for in person visit by the Indian Prime Minister.

Currently, Bangladesh and India are enjoying excellent bilateral relations, termed as ‘golden chapter’ and ‘rock solid’ by leaders of both the countries.

On November 5, a Memorandum of Understanding (MoU) was signed between Serum Institute of India and Beximco Pharma of Bangladesh for priority delivery of 30 million doses of COVID-19 vaccine to Bangladesh.