Quazi Johir arrives with his 23rd book of poems 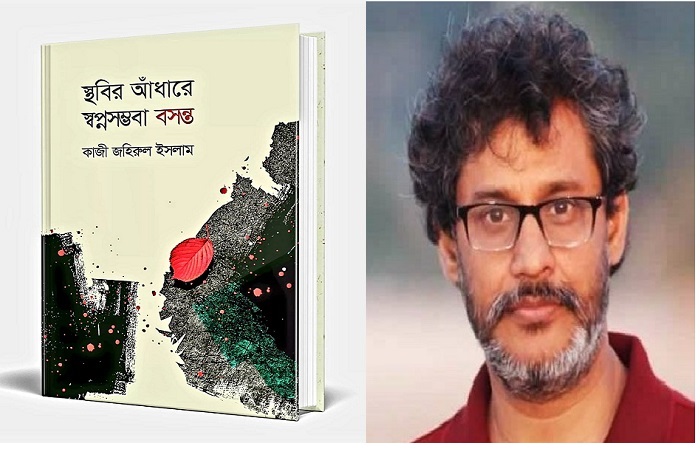 Litterateur Quazi Johirul Islam has 66 books to his credit, among those the number of poetry books stands at 23 including the recent one named 'Sthabeer Andharey Shwapnasambhaba Basanta' (The Dream-possible Spring in the Stagnant Darkness).

This book of Bengali poems was published by Agradoot & Company of Dhaka, Bangladesh.

The book appeared with a pleasant cover which was drawn by Ayub Al Amin. It has already began to reach them who ordered for it in advance.

Poet Quazi Johirul Islam comes with an increased level of poetic confidence in this book. While exchanging opinion with us, the poet expressed his thinking level which indicates a big totality of creation in which humans and animals all are the parts of that bigness.

One of his poems says:--

"Animals are also uterine relatives of humans
Can such days may come any time
At the sea beach people are bath companions of deers
Deers at the laps of humans?"

After going through the book a reader must say that the book is not like others, this is exceptional. Each poem comes with new meaning. Humanity, Covid19, expectations etc are there in the book and those will indicate to a rare heights of the writer's poetic thoughts.

Reading the poems like 'Kankotha' or 'Bhat', the readers will discover that the poet imposed a high standard and new value to those terms, always used in Bengali literature.

Specially the poem 'Bhat' depicts a dramatic picture imposing on the term a value of tradition instead of hunger and lack of food.

Publisher of the book Moni Mohammad Ruhul Amin says:-- Covid19 damaged our publication business. Publishing books is now very risky. We came forward with this book of Quazi Johir because we are respectful to our literature and possessing a high idea about the poet.

In Quazi Johir's poems, a reader can discover that it is not something like other books, rather it seems special. His poems bear some special depths.

Few lines of Johir's poem can bear the problematic picture of Asian subcontinent when it narrates:--

"Kept in the jar of 'pani' with care
cold 'jaul'
Fire engulfed the country."

The poet is never ready to escape from life. His poem says:--

"Death hasn't accepted me
Frequently embraced me the life."

This book of Quazi Johir clearly bears a message that the poet reached an intellectual height in his poetic thinking which is really exceptional.  Overcoming self-centered ego or crossing the primary love affairs of two persons, the poet thought about a wider stage of humanity in his poems.

He then raises the question:--
"Who is the demon in human world
Playing with human blood!"

Poet Quazi Johir never bows or breaks down. Optimistically his poem spreads the ray of hope:--
"Again we shall walk to the distant day
Will embrace friends
And be grateful to the nature".

There are many poems on 'Corona' written in rhythm. In those poems time from April to June of the 2020 was depicted.

The latest book of Quazi Johir's poems can give something new to its readers. Conscious readers will get a lot of experimental poetic expression in the book to take it dearly.