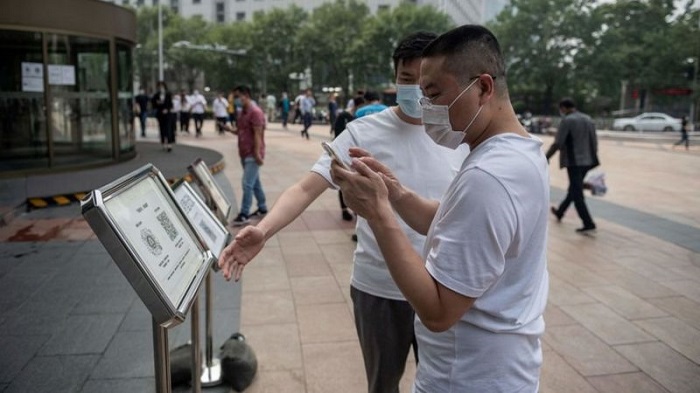 Chinese President Xi Jinping has called for a "global mechanism" that would use QR codes to open up international travel.

"We need to further harmonise policies and standards and establish 'fast tracks' to facilitate the orderly flow of people," he said.

The codes will be used to help establish a traveller's health status.

But Human Rights advocates warn that the codes could be used for "broader political monitoring and exclusion".

Mr Xi made the comments at the G20 summit, an online meeting of heads of state from the world's 20 largest economies, which was hosted by Saudi Arabia over the weekend.

He said the codes could be used to recognise "health certificates based on nucleic acid test results", according to a transcript published by Chinese state news agency Xinhua.

"We hope more countries will join this mechanism," he added.

QR codes are bar codes that can be read by mobile phones.

Mr Xi also called for the re-opening of the global economy, including restoring "global and industrial supply chains" and the "liberalisation of trade of key medical supplies".

Reopening travel lanes remains a challenge for most countries, with spikes in the disease making it difficult for the authorities to lift travel restrictions.

A travel bubble between Singapore and Hong Kong, for example, was postponed shortly before it was due to start this weekend due to a sudden spike in cases in Hong Kong.

"An initial focus on health could easily become a Trojan Horse for broader political monitoring and exclusion," he said.

QR codes have been widely used in China since February to help limit the spread of Covid-19.

Automatically generated QR codes have been assigned to residents as indicators of their health status.

A green code allows someone to travel freely, while an orange or red code indicates that someone needs to quarantine for up to two weeks.

The city of Hangzhou has said it plans to make a permanent version of the QR code-based app, which would be used to assign citizens a personal score based on their medical history, health check-ups and lifestyle habits.

In Singapore and Australia, for example, they're used for contract tracing, with residents using them to check into and out of places they visit, including malls, restaurants and their places of work.