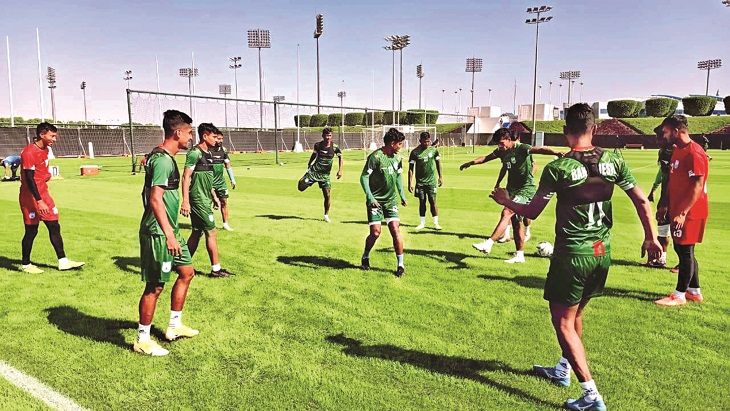 The coronavirus-hit Bangladesh contingent got two amateur teams for practice matches ahead of their one-off lone away match of joint qualifiers round two for FIFA World Cup 2022 and AFC Asian Cup 2023 against Qatar, scheduled to be held at Abdullah bin Khalifa Stadium on December 4 at 10:00pm (BDT).

Bangladesh were supposed to play against a top tier Qatari football club in their upcoming practice matches as the Qatari professional league, also known as QNB Stars League, resumed after a month break on Saturday, but that was not the case.

Bangladesh will play against Qatar Army Football Team and Lusail Sports Club. Qatar Football Association (FA) also announced the venue and time for the practice matches. Bangladeshi booters will take on Army team on November 25 and Lusail SC on November 28, both at 5:30 pm (Qatar time) and at Aziziyah Boutique pitches in Doha.

Now the question arises, how much effective will these practice matches be for the booters, who returned to the field with two Nepal friendlies in November after a long 10-month COVID-19 break, ahead of a World Cup qualifying game against stronger opponents. It also prompted questions about the football diplomacy of Bangladesh Football Federation (BFF) which agreed to play against the Asian Champions with inadequate preparation.

In their first-leg match, Bangladesh conceded a 0-2 goal defeat against the Asian champions Qatar at Bangabandhu National Stadium (BNS) on October 11 last year. Despite conceding the defeat against Asian Champions, the men in red and green gave their best at BNS. The team was fully prepared and the players came straight off the professional leagues. Also, they outplayed Bhutan in the two international friendlies before the game.

But the scenario is totally different now. The men in red and green claimed the two-match Mujib Barsho FIFA Tier-1 International Friendly Series against Nepal with a 2-0 win and a goalless draw. Players played their last domestic league match back in March.

In terms of preparation, the Asian champions Qatar are far ahead of Bangladesh. They played three matches namely against Ghana in October, Costa Rica and South Korea in November. Besides, their booters have been taking part in their ongoing Qatari professional league, also known as QNB Stars League.

Bangladesh also got several blows ahead of the Qatar test. Their English head coach Jamie Day tested positive for COVID-19 for three times and didn’t fly with the team. He reported COVID-19 positive for the third consecutive time on Sunday.

The stand-in team manager Amer Khan and physiotherapist Fuad Hasan Hawlader were the two recent inclusion in the list of COVID-19 victims in Bangladesh squad. BFF also failed here as they couldn’t appoint a professional team manager ahead of the Qatar match. But Jamie’s absence could have a massive impact on the team. The second match against Nepal could be taken as a perfect example regarding this issue. Booters failed to break Nepal defence and didn't prove their worth in the match.

Jamie, who is now quarantined in Dhaka, told The Daily Sun on Sunday, “Well, all I would say is, Qatar played Costa Rica and South Korea and we are playing the Army and a division a 2 team. So, not sure we are playing on the same level required to face Qatar. We just play the games and do the best we can in the short preparation time. Qatar are expected to win comfortably so we just need to perform the best we can. I can’t ask for any more from the players.”

Former national player Alfaz Ahmed said, “We can’t expect to win against Qatar. They are Asian champions. We have to try not to concede too many goals. Also, they are well-prepared and have already played some international matches, leagues. We also need to play more games, it will make us mature.”

Bangladesh were scheduled to face Qatar on October 13, but AFC, with permission of FIFA, postponed the schedule until 2021 due to travel restrictions of different countries in the wake of COVID-19 last August. But they added that the participating nations can play their respective matches with mutual consent. Qatar took the opportunity and sent proposals to opponent nations. Among them, BFF agreed to the proposal.

Meanwhile on Thursday, Bangladesh booters were hard at practice ahead of their practice matches in Qatar.