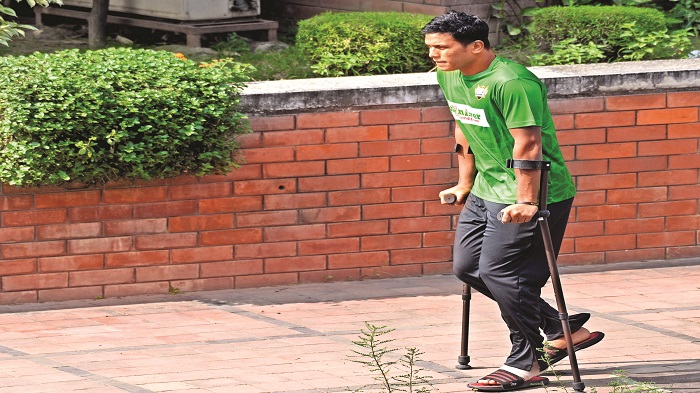 Minister Rajshahi were handed a massive blow ahead of the upcoming Bangabandhu T20 Cup as their all-rounder Mohammad Saifuddin is in doubt for the competition following his ankle injury at BCB Academy Premises on Monday.

Saifuddin can surely call him unlucky as he hurt his left ankle while trying to pick a football from the side line as he twisted his ankle when his boot’s spike stuck on the ground and he totally lost his balance.

He was immediately rushed to the make-shift dressing room with the help of his teammates where he spent the rest of the time after taking painkiller with his left-ankle bandaged.

Saifuddin was struggling and that was evident in his facial expression while it also put Minister Rajshahi in trouble considering they were banking on him heavily.

Rajshahi had the chance to call him in the fourth round but instead of picking left-arm pace bowler Mustafizur Rahman or current national T20 skipper Mahmudullah Riyad, they opted for all-rounder Saifuddin.

Rajshahi were in two minds regarding Mahmudullah Riyad’s availability considering the fact he had to skip the ongoing Pakistan Super League for contracting coronavirus.

Mustafizur’s exploits in the recent days with the cherry could not make them hopeful about the cuttermaster that prompted them to take all-rounder Saifuddin.

“During training he (Saifuddin) suffered an ankle injury. He is now under observation of team physio and BCB medical team,” Minister Group Rajshahi manager Hannan Sarkar said in a message to media.

“Treatment is going on under medical protocol of BCB. Physio will inform further update of his progress tomorrow (Monday),” added Sarker.

The pace-bowling all-rounder was seen leaving the ground on a crutch while team official said that he was taken for tests.