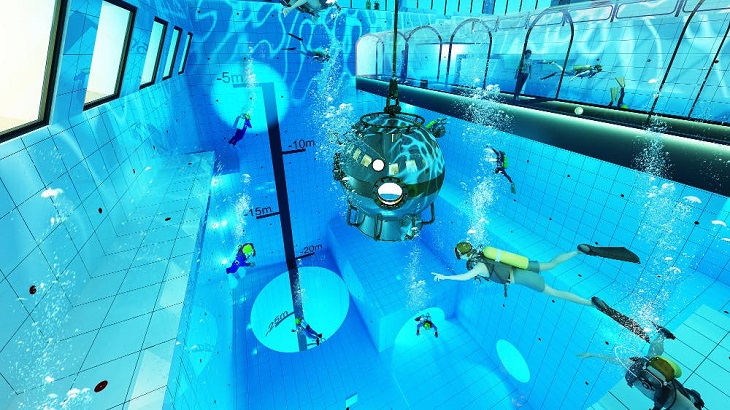 A 45.5-metre (150-foot) deep diving pool with artificial underwater caves and Mayan ruins, the world's deepest such structure, opened near Warsaw this weekend.

The complex, named Deepspot, even includes a small wreck for scuba and free divers to explore.

Unlike regular swimming pools, Deepspot can open despite coronavirus restrictions in Poland because it is a training centre that offers courses.

A hotel with rooms from which guests will be able to watch divers at a depth of five metres is also planned.

"It's the world's deepest pool," Deepspot director Michal Braszczynski, a 47-year-old diving enthusiast, told AFP at the opening on Saturday.

The current holder of the Guinness world record is in Montegrotto Terme in Italy and is 42 metres deep.

The Blue Abyss pool planned to open in Britain in 2021 will be 50 metres deep.

Around a dozen customers came on the first day, including eight seasoned divers who hoped to pass an exam to become instructors.

"There are no magnificent fish or coral reefs here so it is no substitute for the sea but it is definitely a good place to learn and to train in order to dive safely in open water," said Przemyslaw Kacprzak, a 39-year-old diving instructor.

"And it's fun! It's like a kindergarten for divers!"

Jerzy Nowacki, a 30-year-old forestry officer and diving novice, said: "For my first time, we went down five metres but you can see all the way to the bottom -- the wreck, the caves -- it's magnificent!"

Braszczynski said the pool "will also be used by the fire brigade and the army. There are many scenarios for training and we can also test different equipment".

Some 5,000 cubic metres of concrete were used over the two years it took to build the pool and it cost around 40 million zloty (8.9 million euros, $10.6 million).