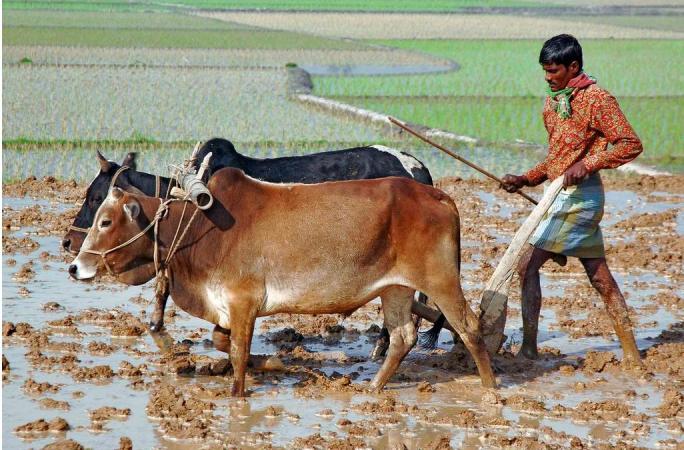 Farmers are being deprived of huge profits from their agricultural produce as middlemen buy their crops at lower prices and sell them at higher prices at different kitchen markets.

Sources said many farmers have to sell crops and vegetables at lower prices to middlemen on different grounds amid the soaring prices of agricultural produce at the city markets.

Experts said middlemen are eating into the profits which farmers should get by selling their produce at the farm level.

They, however, have blamed the multi-layered system of middlemen involved in the sales of agricultural produce from farms to consumers, for the farmers’ deprivation of proper profits.

Vegetable prices are 100-200 per cent price higher in the kitchen market than the farm level, according to the information by the Department of Agricultural Marketing (DAM).

The middlemen are bagging huge profits through depriving farmers of the production cost of their produce, they added.

Farm economist Professor ASM Golam Hafeez said chain farmers are not getting fair prices of their produce for lack of a proper marketing channel.

“Sometimes, farmers throw away their vegetables, but consumers in the major cities have to buy vegetables at higher prices,” he said.

The farm economist also said the market chain has also collapsed during the coronavirus pandemic that also shot up vegetable prices in the capital and other major cities.

“Farmers don’t have the opportunity to enter the urban market. They have to depend on middlemen, who eventually make hefty profits while farmers are deprived of fair prices of their produces.”

“We have to create a modern marketing system to resolve this problem,” he said, adding that value-addition and developing market chain are needed for this.

The wholesale price of bean was Tk 40-46 per kg in the capital on Monday, according to data of the Department of Agriculture Marketing (DAM).

The retail price of the bitter guard was Tk 70-80 per kg in the capital against the wholesale price of Tk 35-40 on Monday. The price was Tk 20-25 per kg in Kushtia, Meherpur and adjacent areas.

Cucumber price was selling at Tk 20-25 a kg in Kushtia and Tk 25 in Meherpur on Monday. But its retail price was Tk 60-70 per kg against the wholesale price of Tk 30-38 per kg in the capital.

The retail prices of cabbage, turnip, radish, spinach, bottle gourd leaf, red amaranth, mustard and green amaranth are also much higher than the prices in wholesale markets in the capital and at the growers level.

Mohammad Yousuf, director general of the Department of Agricultural Marketing (DAM), told the Daily Sun that they will fix the retail and wholesale prices of vegetables soon after holding meetings with stakeholders.

In the 2019-20 FY, a total of 1.72 crore metric tonnes vegetables were produced in the country, according to the statistics from the Agriculture Ministry.