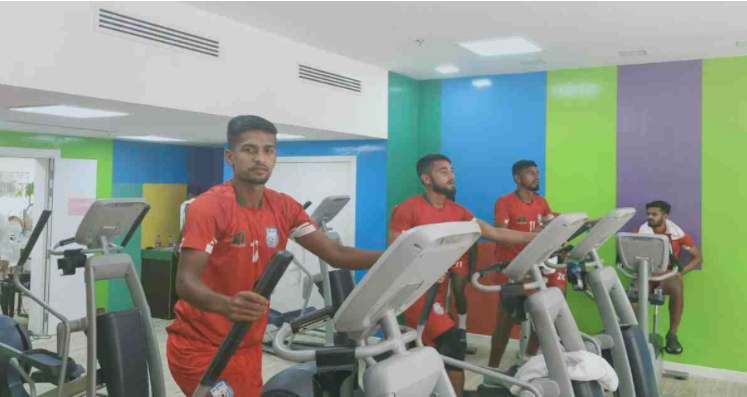 Bangladesh National Football Team will not get top tier football clubs of Qatar for the upcoming practice matches as the Qatari professional league, also known as QNB Stars League, has resumed after a month break on Saturday.

The men in red and green are likely to play lowly Qatari outfits in their two practice matches, scheduled to be held on November 25 and 28 at Aspire Academy ground in Qatar capital Doha. However, Qatar Football Association is yet to confirm the teams.

A 35-member Bangladesh national football team, including 25 players and 10 officials, on Thursday reached Qatar capital Doha to play their lone away match of joint qualifiers round two for FIFA World Cup 2022 and AFC Asian Cup 2023. The match is scheduled to be held at Abdullah bin Khalifa Stadium on December 4 at 10:00pm (BST).

The team, which were staying at a 3-day quarantine at Ezdan Tower Hotel in Doha, underwent the first COVID-19 tests on Friday. Two out of 35 members reported positive. They are -- team manager Amer Khan and Fuad Hasan Hawlader (physiotherapist). Their second tests for COVID-19 held on Saturday. They would start training on the field after getting the test reports. However, booters, split into three groups, started to do gym training sessions from Saturday. After the session, defender Topu Barman said, “Yesterday (Friday) we did sessions at rooms. Today we gave our samples for COVID-19 tests and did our gym sessions after that. We will start our training on the field after testing negative.”

Concurring Topu, the acting head coach Stuart Watkiss said, “We have COVID-19 tested again. Players did their first gym session this afternoon. We are working on their fitness. Players will do a lot of work in the gym under the guidance of our fitness coach during this quarantine.” Ahead of the campaign, BFF announced a 37-member squad on Wednesday.  SM Monjurur Rahman Manik tested positive for COVID-19 while Nabib Newaz Ziban ruled out of the squad due to an injury. Head coach Jamie Day, who was also tested positive for COVID-19, didn't fly with the team. He underwent a test again on Friday and waited for the result.

After a long COVID-19 break, the men in red and green returned on the field and claimed the two-match Mujib Borsho FIFA Tier-1 International Friendly Series against Nepal this month. They defeated the touring side by 2-0 goals in the first match on Nov 13 while played a goalless draw in the second match on Nov 17, both at Bangabandhu National Stadium.

The national team last won the SAFF championship in 2003. With the day's feat, they ended the 17-year-drought of a series win.