We are mentally fit, says Jamal 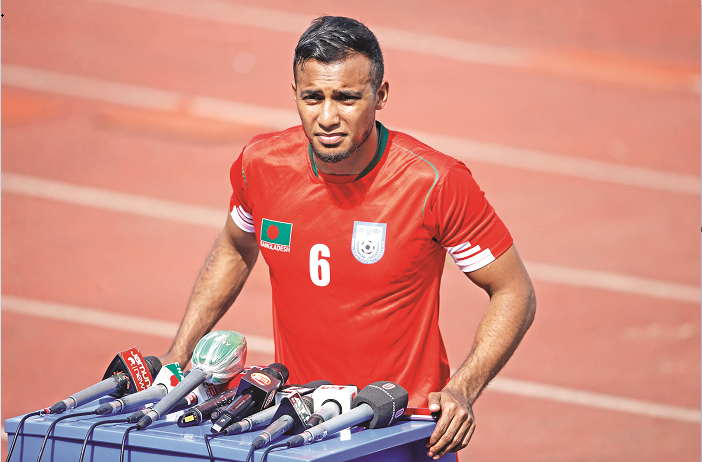 “We got a single room each here because we are in quarantine. But we are mentally fit and doing fitness exercises from the hotel because we cannot go out of the hotel unfortunately.  But overall everybody is ok, safe and we are just looking forward to the day we can practice again. I hope to see you soon again,” Jamal told the reporters in a video message on Friday.

The acting head coach Stuart Watkiss informed that they provided players with fitness programs to do at room.

“Qatar FA informed us that everybody now must stay in their rooms in isolation. We will be retested tomorrow and hopefully we will get the result the day after that. If everything is ok, we can resume training. But at this moment, we are not able to do anything like training, anything in terms of preparation we would like to do. I spoke with the physio and fitness coach over the phone to come up with programmes that the players can do in the rooms,” Stuart said.

“Everybody wants to get back to training as early as possible. We can’t miss any days of training. We have to see the next tests and results, so that we can make a plan regarding training,” the acting head coach added.

A 35-member Bangladesh national football team, including 25 players and 10 officials, on Thursday reached Qatar capital Doha to play their lone away match of joint qualifiers round two for FIFA World Cup 2022 and AFC Asian Cup 2023. The match is scheduled to be held at Abdullah bin Khalifa Stadium on December 4 at 10 pm (BDT).

Two out of 35 members reported positive on Friday while they underwent COVID-19 tests namely team manager Amer Khan and Fuad Hasan Hawlader (physiotherapist). Bangladesh Football Federation (BFF) informed that Amer and Fuad had no symptoms and the rest of other members were well. The team are staying at Ezdan Tower Hotel in Doha.

After a long COVID-19 break, the men in red and green returned on the field and claimed the two-match Mujib Barsho FIFA Tier-1 International Friendly Series against Nepal this month. They defeated the touring side by 2-0 goals in the first match on November 13 while played a goalless draw in the second match on November 17, both at Bangabandhu National Stadium (BNS).

The national team last won the SAFF championship in 2003. With the day's feat, they ended the 17-year-drought of a series win.