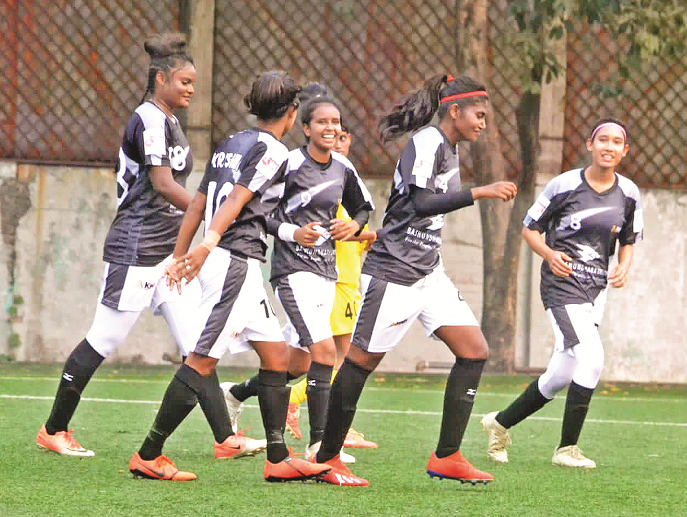 Defenders Nargis Khatun and Akhi Khatun scored two goals each while captain-cum-forward Sabina Khatun contributed one for the winning side.

In the day’s match, Nargis opened the account for Kings with a header off a corner from forward Maria Manda in the 22nd minute (1-0). In the 33rd minute, the defender doubled the margin with another smart header, again off a corner from Manda (2-0).

In the second half, captain Sabina scored the third goal utilising a low pass from Manda in the 62nd minute (3-0). Defender Akhi netted her first goal, off a long cross from Sheuli Azim in the 82nd minute (4-0) and sealed the fate of the game scoring her second in the 90th minute (5-0).

Kings will play their next match against Nasrin SA at the same venue on November 27 at 2:30pm.

After a recess of 9-day, the second phase kicked-off on Friday. In the next match on Saturday, Jamalpur Kacharipara will take on Kumilla United at 11:30am while Nasrin SA are set to play Spartan MK Gallactico Sylhet at 2:30pm.

Earlier, riding on two hat-tricks, Kings outplayed Begum Anwara by 12-0 goals in their first match at the same venue on February 22. Krishna scored her hat-trick scoring four goals in the 4th, 11th, 55th and 90th minutes while Sabina completed her hat-trick netting three goals 1st, 46th and 63rd minutes. Among others, Midfielder Mishrat Jahan Moushumi added two goals in the 40th and 41st minutes while Defenders Sheuli Azim, Nargis Khatun and Forward Maria Manda netted one each in the 57th, 83rd and 87th minutes.

Meanwhile, the champions of the league will be awarded with Tk 2 lakh and a gold-plated trophy while the runners-up will get Tk 1 lakh. Besides, each team will get participation money of Tk 2 lakh.