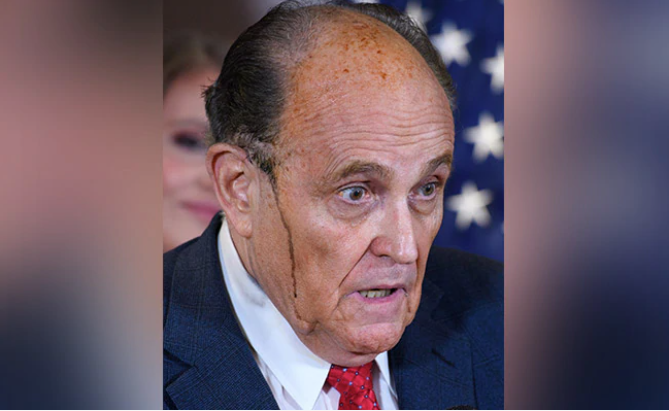 It's very simple, according to Rudy Giuliani and the rest of President Donald Trump's legal posse, but also very vast. China is in on it. Cuba is on it. Antifa and George Soros are in on it. At least two presidents of Venezuela, one dead and one living, are in on it.

Big Tech is in on it; a Web server from Germany is involved (there's always a server involved). Multiple major U.S. cities are in on it, as are decent American citizens who volunteer at polling precincts. Argentina is in on it, too, sort of. Chicago Mayor Richard Daley was in on it back in 1960, when, according to an unproved conspiracy theory, he stole the presidency for John F. Kennedy, thereby launching an ongoing pattern of corrupt cities stuffing or scrapping ballots.

The "it" is a massive, premeditated scheme to steal the election from Donald Trump, according to Giuliani, and it also involved corralling poll watchers at great distances from the ballot counting.
Perhaps a cinematic example would help explain.

"Did you all watch 'My Cousin Vinny?' You know, the movie?" Giuliani asked Thursday. He was sweating at a lectern in the small lobby of the Republican National Committee headquarters on Capitol Hill. "It's one of my favorite law movies, 'cause he comes from Brooklyn."

About 100 journalists and hangers-on had crammed into this potential coronavirus incubator for a news conference on the perverse legal strategy of President Donald Trump's failed reelection campaign, which Giuliani is trying to hustle toward a twist ending.

As the former New York mayor digressed about votes that could've been cast by dead people and Mickey Mouse, Trump campaign officials were at their headquarters in nearby Rosslyn, Va., winding down operations and closing out the budget.

"How many finguhs do I got up?" Giuliani said at the lectern, doing a terrible Joe Pesci, from the scene where he cross-examines an elderly eyewitness with bad eyesight. Giuliani was trying to analogize the claims of Republican poll watchers, who say they were too far away from ballot counting to adequately observe it.

Fifteen minutes later, as he was describing the election results as "a massive fraud," black liquid began to slowly streak from each of his temples, down his cheeks. It might have been perspiration liquefying his hair dye, or sluicing the black polymer off his eyeglasses. One Manhattan stylist told the New York Times that it might've been running mascara; perhaps Giuliani had applied it to touch up the color of his sideburns.

One Trump campaign adviser texted a Washington Post journalist as the black streaks inched toward Rudy's jowls: "Is he deteriorating in real time?"

If Rudy is deteriorating, then so is anyone who listens to him. For 90 minutes, an unmasked Rudy and four maskless colleagues - "an elite strike force team," according to senior legal adviser Jenna Ellis - spun a confusing web of conspiracies that indicate Trump won the election that he lost. A revolution, they said, was at hand.

"It is the 1775 of our generation," declared fellow strike force team member Sidney Powell, who once appeared on Fox Business to claim that an immigrant "invasion" is spreading "polio-like paralysis" among American children. She continued: "Globalists, dictators, corporations, you name it - everybody's against us except President Trump."

Brendan Buck, previously a top aide to Paul Ryan, a Republican, when Ryan was House speaker, was streaming C-SPAN at his home in the District of Columbia.

"I picture Trump glued to this and just lapping it up," Buck said.

"I love the president, I wanted him to win this election," Geraldo Rivera would say later, on Fox News. "What I saw with Rudy Giuliani, who I've known for decades, was bizarre, was unfocused."

"That press conference was the most dangerous 1hr 45 minutes of television in American history," typed Krebs, who vouched for the integrity of the election and was subsequently fired by Trump this week. "And possibly the craziest."

Things certainly are craziest right now. The president is refusing to concede. And Rudy has gone full Rudy.

Some people in the Trump campaign thought Thursday's news conference was a bad idea, though they neither stopped it nor put their names on the record objecting to it. Other Trump officials, including campaign manager Bill Stepien, have described Giuliani's effort as unserious. Since becoming the president's personal lawyer, Giuliani has clashed with White House chiefs of staff.

Reince Priebus tried to block him from the Oval Office, John Kelly tried never to be in the room when Trump spoke with him, and former acting White House chief of staff Mick Mulvaney told others that Giuliani was an albatross during the impeachment process. But Mark Meadows, the current chief of staff, appreciates that Giuliani is willing to fight aggressively on television.