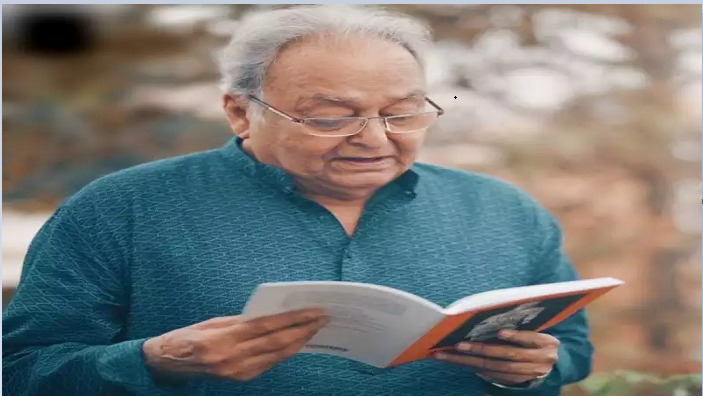 It will be Soumitra Chatterjee’s first film after his demise. Come December, Bengal’s flamboyant hero, cultural icon who breathed his last on November 15 will be seen as a writer in Narugopal Mondol’s film ‘Abolamban’. Soumitra had completed the dubbing for this film before he started shooting for Parambrata Chattopadhyay’s ‘Abhijaan’.

Besides Soumitra Chattopadhyay, ‘Abolamban’ will also see Lily Chakraborty, Biswajit Chakraborty, Meghna Halder and others in pivotal roles. The film revolves around a writer who is working on his latest novel Abolamban. Interestingly, when the writer finishes the novel he finds out the characters from his novel exist in his real life as well.

Speaking about the experience of working with Soumitra Chatterjee, the director says despite being stalwart of Indian cinema, Soumitra had given him full freedom. He never complained if a shot had more than one takes.

To work with such a humble director’s actor is a memorable experience for the director for whom this was third time he was working with Soumitra. If all goes according to plan, the film will have its theatrical release in December.

A more than a month-long battle finally came to an end on November 15. Soumitra Chatterjee lost his battle with COVID-19 and with this it was an end of an era. The thespian breathed his last on Sunday morning after his condition went to an extremely critical state on November 14 and he was put on life support.

Soumitra, who made his debut in Satyajit Ray's cult classic ‘Apur Sansar’, was under treatment at a Kolkata private hospital since October 6 after he tested positive for COVID-19. However, he later tested negative but the Covid- 19 encephalopathy set in slowly and several other complications surfaced.