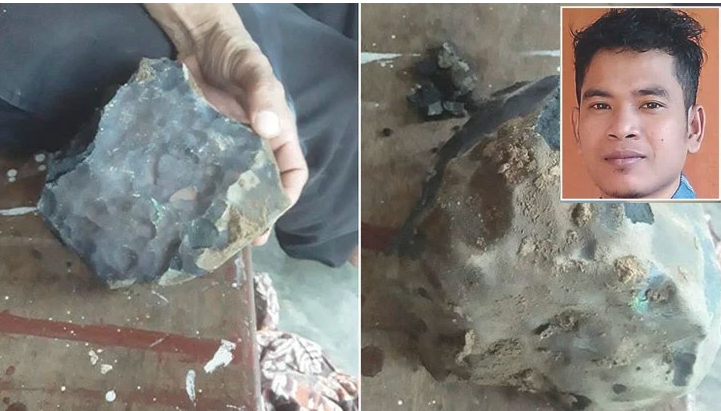 A humble coffin maker in Indonesia became an instant millionaire - when a meteorite which was recently sold for $1.8 million (Dh6,611,760) crashed through his roof.

According news reports, 33-year-old Josua Hutagalung was working next to his house when the space rock smashed into his living room in the Kolang area, in the province of North Sumatra back in August.

He told local news website Kompas: “When I lifted it, the stone was still warm and I brought it into the house. The sound was so loud that parts of the house were shaking too. And after I searched, I saw that the tin roof of the house had broken.”

Hutagalung sold the rock to a specialist collector, who has given him enough money to retire and build a new church in his village.

The father-of-three was reportedly given the equivalent to 30 years’ salary for the space rock, according to media reports.
Posting pictures of the rock on Facebook, Hutagalung wrote: “Suddenly a black rock fell from the sky. Surprised me. But whatever it is, hopefully a good sign for our family.”

“I have also always wanted a daughter, and I hope this is a sign that I will be lucky enough now to have one,’ he told tabloid newspaper The Sun.

According to media reports, many people visited Hutagalung’s house to see the rare object before he sold it.

“Many people have come, out of curiosity, and want to see the stone,” he was quoted as saying.
Reportedly, three further fragments of the meteorite, which was officially named Kolang, were found in nearby areas when it crashed. One was discovered in a paddy field less than three kilometres from Hutagalung’s home.