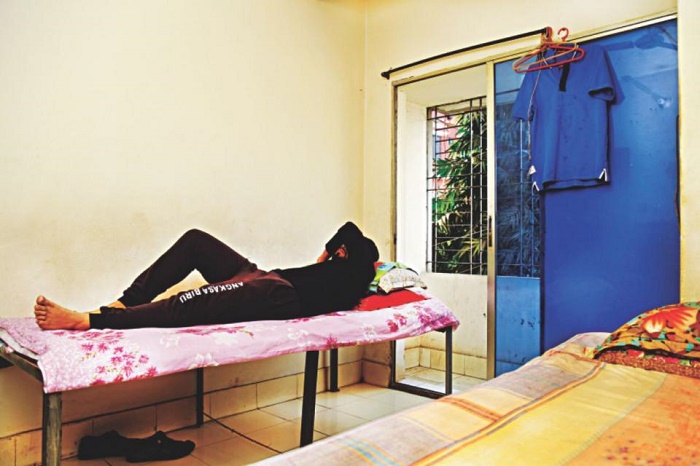 Illegal or unauthorised drug rehabilitation centres or rehabs have sprung up all over the capital and elsewhere in the country without following rules and regulations.

It is a far cry to treat drug addicts by maintaining the minimum standards, in many cases killing patients due to malpractice in those drug rehabilitation centres.

Even in the name of treatment, patients are being physically abused. Torture is a regular occurrence in most treatment centres.

According to the Department of Narcotics Control (DNC), it is mandatory to get a licence from the DNC to run a drug addiction treatment center. However, most organisations do not have a licence.

There is an allegation that those who have taken the license of drug addiction treatment center are not paying attention to the rules and regulations. Some of those admit more patients than the approved limit. They are running their activities by managing the concerned administration, many alleged.

There are only four government drug addiction treatment and rehabilitation centers located in Dhaka, Chittagong, Rajshahi and Khulna.

But the problem is nobody knows how many are operating without licences. According to various sources, it came to know there are at least 1,500 such illegal drug rehabilitation centers across the country.

It was also seen that many drug rehabilitation centers introduce them as mental hospitals.

While asked about the issue, Rahul Dey told the Daily Sun, “The Department of Narcotics Control (DNC) issued licences for drug treatment while the Directorate General of Health Services (DGHS) issued licences for psychiatric treatment. Therefore, it is the responsibility of DGHS to monitor it.”

It was alleged that most drug rehabilitation centres across the country have no proper medical facilities. Horrible torture was inflicted on the patients. But these hospitals are supposed to provide intensive services.

The issues of torture in drug rehabilitation centres came to the fore after the death of Senior Assistant Superintendent of Police (ASP) Anisul Karim Shipon when he was beaten by the staff of the Mind Aid Hospital in Adabor.

On November 9, Senior ASP Anisul was beaten to death just after he went there for treatment of mental issues. At least seven employees were seen holding Anisul down to the floor, while two were hitting him with their elbows in a video footage.

Mind Aid Hospital in Adabor was operating as a mental health hospital besides treating the drug addicts, though it had no licence for either.

In a daily sun investigation, it came to know that patients were kept under lock and key in most of the drug treatment centres. These institutions do not have the necessary doctors and equipment.

To bring drug addicts back to a healthy life, their family members are always nervous after sending them to those medical centres.

As a result, a patient himself and his relatives are returning home without treatment. And even after treatment, the desired result does not match.

“A drug user is not only physically patient but also mental patient. He/she needs mental health improvement beside physical treatment to get rid of drug effect.”

He mentioned that according to law drug treatment and rehabilitation centre is under the home ministry while the mental health issue is under the Directorate General of Health Services (DGHS).

Iqbal Masud said, “Due to that double licensing issues sometime many of our members faced problem. So that our members urged the authorities concerned for resolving the issue of double licencing issue.”

According to the DNC list, there is no public or private drug addiction treatment and rehabilitation centre in 23 districts in the country.

Experts said the main reason behind the growing number of unauthorised rehabs is the lack of such facilities both at government and private levels.

Meanwhile, the Department of Narcotics Control (DNC) has launched an operation against the drug rehabilitation centres across the country on November 13.

All illegal drug treatment and rehabilitation centrrs in the country will be raided in phases, said DNC Assistant Director Rahul Dey.

At the same time, a campaign will be launched in the approved drug rehabilitation and rehabilitation centres to see if the medical services are being provided properly, he added.