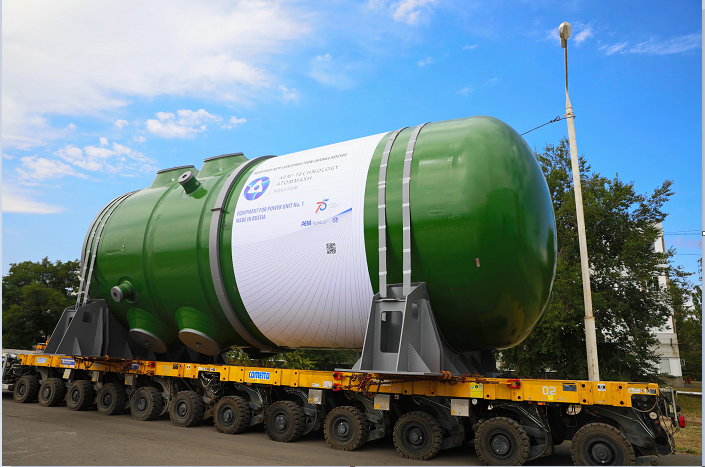 “Main equipment of the reactor compartment of Unit 1, RNPP, the country’s first nuclear power plant, arrived from Russia to the construction site,” according to a message received here today.

It said on November 10, a special barge delivered reactor pressure vessel for VVER-1200 and a steam generator from Mongla to the newly built river terminal in the immediate vicinity of the nuclear power plant construction site.

Earlier, on 20 October, the equipment arrived on the cargo vessel called “Daisy” at Mongla port, where it was reloaded onto a river barge.

The transportation of heavy-weight equipment (the weight of the reactor vessel-333.6 tonnes, the steam generator-340 tonnes) to the Rooppur NPP construction site took almost 2.5 months.

The distance along the sea and river routes was, in total, more than 14 thousand kilometers. The reactor pressure vessel and the steam generator were manufactured at the Atommash plant in Volgodonsk, a branch of the AEM-technologies company (part of the Rosatom machine-building division – Atomenergomash JSC).

The equipment was sent to Bangladesh by sea-through the Black Sea and the Suez Canal. The last part of the difficult route to the NPP construction site ran along the Padma River from the port of Novorossiysk.

The reactor is a vertical cylindrical body with an elliptical bottom, inside which the core and internals are located. The steam generator is a cylindrical vessel with two elliptical bottoms. In its middle part there are collectors for supplying and removing the coolant, in the upper part there is a steam space, and in the lower part there is a heat exchanger consisting of 11,000 stainless pipes with a total length of 148.5 km.

The Rooppur NPP is a Russian-designed nuclear power plant in the People’s Republic of Bangladesh. The selected site for the construction of the station is located on the east bank of the Padma River, 160 km from the capital of Bangladesh, Dhaka.

The Rooppur NPP is planned to be built within the framework of an intergovernmental agreement between Russia and Bangladesh, which was concluded in November 2011.

The foundation stone of the future power plant was laid in the fall of 2013. The plant will consist of two power units with VVER-type reactors, the life cycle of which is 60 years with the possibility of extension for another 20 years.