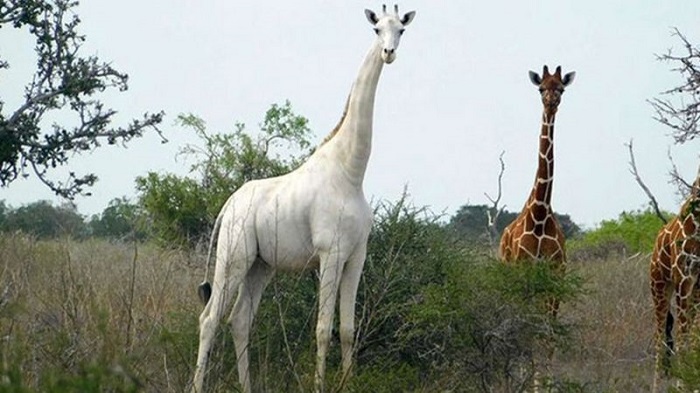 The world's only known white giraffe has been fitted with a GPS tracking device to keep poachers at bay in north-east Kenya, conservationists say.

The giraffe has a rare genetic condition called leucism, which causes the loss of skin pigmentation.

He is thought to be the last of his kind, after poachers killed two of his family members in March.

Rangers fear the giraffe could suffer the same fate as his relatives, a female and her seven-month-old calf with similar white skin.

Their carcasses were found in a conservation area in Kenya's north-eastern Garissa County, where the male giraffe is currently living alone.

The Ishaqbini Hirola Community Conservancy, which oversees wildlife in the area, said the tracking device was attached to one of the giraffe's horns on 8 November.

In a statement released on Tuesday, the non-profit group said the tracking device would give hourly updates on the giraffe's whereabouts, enabling rangers to "keep the unique animal safe from poachers".

The manager of the group, Mohammed Ahmednoor, thanked conservationists for their help in protecting the giraffe and other wildlife.

"The giraffe's grazing range has been blessed with good rains in the recent past and the abundant vegetation bodes well for the future of the white male," he said.

The Kenya Wildlife Society, the main conservation body in the east-African country, said it was happy to assist in efforts to protect "unique wildlife like the only known white giraffe".

White giraffes were first spotted in Kenya in March 2016, about two months after a sighting in neighbouring Tanzania.

A year later, white giraffes made headlines again, after the mother and her calf from the conservancy in Kenya's Garissa County were caught on camera.

ative to more than 15 African countries, giraffes are the world's tallest mammals. They are hunted by poachers for their hides, meat and body parts.

Some 40% of the giraffe population has disappeared in the last 30 years, with poaching and wildlife trafficking contributing to this decline, according to the Africa Wildlife Foundation (AWF).

Giraffes have been designatedas a vulnerable species on The International Union for Conservation of Nature's (IUCN) Red List, with an estimated population of 68,293 globally.