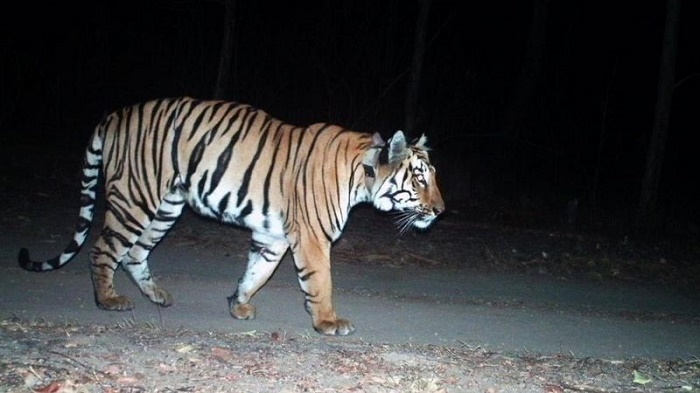 He has completed the longest walk by a tiger ever recorded in India and "settled" in a sanctuary, where he is the only big cat.

Fondly called Walker by wildlife officials, the now three-and-a-half-year-old male left its home in a wildlife sanctuary in the western state of Maharashtra in June last year. He was possibly in search of prey, territory or a mate.

Fitted with a radio collar, he travelled some 3,000km (1,864 miles) through seven districts in Maharashtra and the neighbouring state of Telangana over nine months before "settling down" in another sanctuary in Maharashtra in March. The collar was removed in April.

The 205-sqkm Dnyanganga sanctuary is home to leopards, blue bull, wild boar, peafowl and spotted deer. Walker is the only tiger living there, say wildlife officials.

"He has no territorial issues. And he has adequate prey," Nitin Kakodkar, the senior-most forest official of Maharashtra state told the BBC.

Now wildlife officials are mulling whether they should move a female tiger to the sanctuary to give Walker a mating partner, a move which will be "quite unprecedented".

Tigers are not solitary creatures, they say, and have a natural instinct to mate. However, moving a second tiger to the sanctuary, is not going to be a easy decision.

"For one, it is not a big sanctuary. It is surrounded by farms and degraded forests. Also, if Walker breeds here, there will be pressure on prey and the new-born tigers will try to disperse," Mr Kakodkar said.

India holds just 25% of total tiger habitat, but accounts for 70% of all remaining wild tigers, with around 3,000 animals. Tiger numbers have increased, but their habitat has shrunk and prey is not always plentiful, say experts.

Every tiger requires a breeding prey population of 500 animals in its territory to ensure a "food bank", say experts.

Walker was fitted with a radio collar in February last year and continued to roam the forests until the onset of monsoon rains to "find a suitable area to settle".

Wildlife officials say the big cat did not travel in a "linear manner". He was tracked through GPS satellite information every hour and was recorded in more than 5,000 locations.

Over winter and much of this summer, Walker was tracked travelling back and forth over farms, along rivers, streams and highways. Winter is cotton growing season in Maharashtra, and the tall crop helped the cat to hide and walk through the farms. He mostly travelled at night, killing wild pigs and cattle for food.

He came into conflict with humans only once, when it "accidentally injured" one person who traced his pugmarks to a thicket where he was resting. The man escaped with minor injuries.

"What this long walk demonstrates is that in spite of development and rising human population, the rural areas of Maharashtra are still conducive for tigers to move freely. Development, in that sense, still hasn't become a barrier to animal movement here," Dr Bilal Habib, a senior biologist with the Wildlife Institute of India, told the BBC.