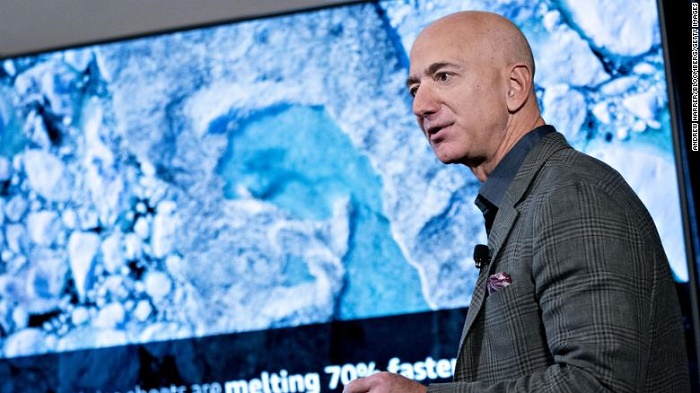 Amazon founder Jeff Bezos announced Monday that he will give $791 million in grants as part of his Bezos Earth Fund to 16 organizations that are working to protect the environment.

The fund is part of the CEO's $10 billion pledge to support scientists, activists, NGOs and organizations working to protect the environment.

"I've spent the past several months learning from a group of incredibly smart people who've made it their life's work to fight climate change and its impact on communities around the world," Bezos wrote in an Instagram post on Monday announcing the news. "I'm inspired by what they're doing, and excited to help them scale."

The full list of grantees are a mix of big name NGOs, labs, reforestation and climate justice groups.

The news comes one year after Amazon announced "The Climate Pledge," which is the company's commitment to be 100% powered by renewable energy by 2025 and be net zero carbon by 2040. Amazon has also purchased 100,000 electric delivery vehicles and invested $100 million into reforestation projects and "climate mitigation solutions."

"We can all protect Earth's future by taking bold action now," Bezos wrote in his post on Monday.

Bezos's $10 billion pledge is a fraction of his personal net worth, which the Bloomberg Billionaires Index estimates is currently $184 billion.

And Amazon has been criticized for the environmental impact of its emphasis on faster and faster shipping, as CNN reported in 2019.

Bezos has been under pressure from his employees to do more to protect the environment. Thousands of Amazon employees signed a letter in May of 2019 asking how the company planned to respond to climate change, and many of them staged a walkout in September of 2019 calling on it to do more.

A day before the walkout, Amazon announced a pledge to go carbon neutral by 2040, ten years before the deadline set out by the Paris climate agreement. The company also said it will deploy 100,000 electric delivery vans by 2024.

In February, when Bezos announced the $10 billion pledge, Amazon Employees for Climate Justice, the group that staged last year's walkout, responded by saying more needs to be done to address underlying causes like fossil fuel consumption.

"Will Jeff Bezos show us true leadership," they said in a statement at the time, "or will he continue to be complicit in the acceleration of the climate crisis, while supposedly trying to help?"