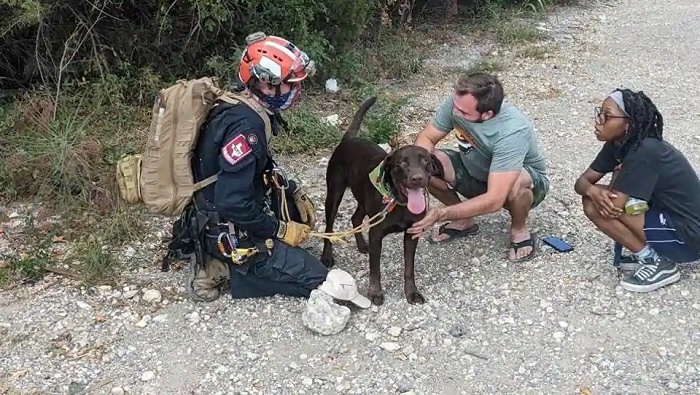 The Internet loves a good rescue story and this one, of a dog, is winning many hearts. A post shared on Facebook details an incident in which the dog fell off a cliff in Texas. Thankfully, a rescue operation team was close by and helped the dog be reunited with its owners.

The post has been shared on Facebook by Austin-Travis County Emergency Medical Services (ATCEMS). “Special Operations Training Captain R. Luddy was eating his lunch at the Pennybacker bridge overlook today, awaiting other members of #ATCEMS Special Operations Rescue Team to do some ropes training, when he was approached by several people who looked rather worried,” details the post.

They then told Luddy about the dog, named Stout, who had fallen off a cliff nearby. Luddy immediately rushed to the dog’s rescue grabbing his bag and ropes. He also alerted other members of his team.

Luddy reached the spot from where the dog fell and used his equipments to rappel down the cliff to find it. “After searching for a short time, Captain Luddy located the dog, named ‘Stout’ who was miraculously, mostly unharmed,” says the post.

Luddy then used rescue ropes to make a leash and walked Stout back to its owners through a trail. The dog was sent to the emergency vet to get checked out.

The post is complete with pictures from the rescue.