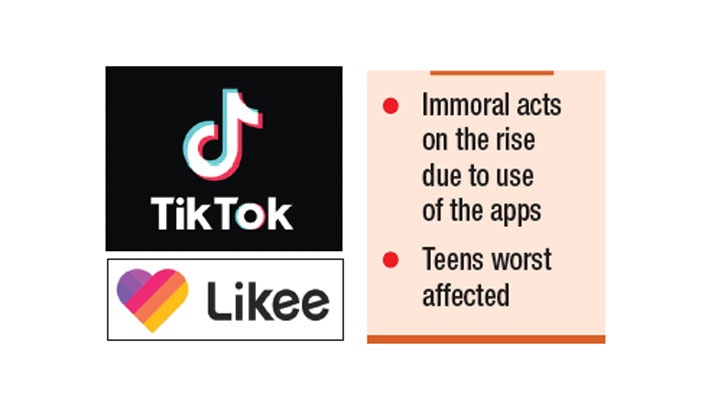 Two popular short-video and social media platforms – TikTok and Likee – are meant for healthy entertainment, but nowadays they have become tools of moral and social degradation, especially for the young generation.

Many people, especially teenagers, post obscene and immoral videos on these apps, which are making them morally degraded.

An unhealthy competition is going on among users of TikTok and Likee in order to increase the numbers of their followers.

They are making video contents with negative gesture and posture. The presentation of these contents produces negative reactions from all classes, including children and adolescents.

These apps are misguiding the youth by impairing their morality, social norms and mutual respect.

The negative use of these technological products has led to such a moral degradation that swimming parties are organised surrounding TikTok and Likee apps. Unethical activities, including prostitution, happen in those parties.

In the wake of criticism about TikTok and Likee contents, this correspondent reviewed various video-sharing social networking platforms and found that people of different ages are making videos using these media. Most of the video contents are vulgar.

Most followers of these cheap contents come from low-income families. These so-called 'celebrities' are often sharing provocative videos to put themselves in the forefront of TikTok and Likee, thus increasing the number of their followers.

Md Tawohidul Haque, Assistant Professor of Institute of Social Welfare and Research, Dhaka University, told daily sun, “Although apps like TikTok and Likee are made for building positive attitude, they are creating a negative outlook due to lack of state policy and social etiquette.”

He said an unhealthy competition among the teenagers is growing day by day. They are creating cheap, obscene and immoral contents.

“Besides these apps, we need to control the social media also. If the government makes national identity card (NID) mandatory for opening a social media account, crimes related to social media will decrease and it will be easy to nab the criminals,” he added.

He said the family and the society should keep an eye on the dress, manners and haircut of the children and teenagers.

Families should play a strong role in keeping teenagers away from using high-tech products before the age of 18.

Sources said in these apps, actors and actresses who play their role for the cheap contents are getting involved in conflicts and clashes with one other in order to increase the number of followers.

These apps have also led to big fight between the followers of different celebrities.

The clash between Opu and Mamun’s followers revealed the dark side of the apps.

Incidents like serial rape have also taken place surrounding these apps. Miscreants pretend themselves as models or sometimes as directors, and thus they trap teenagers who have deep passion for acting and modeling career and finally rape them.

Police have arrested a young man named Rasul Hridoy, 24, from Kuril in the capital on charges of raping four teenagers for 11 days in a row in the name of making Tiktok videos.

According to police, the accused used to make videos with a group of teenagers for Tiktok and Likee. Five of them came to Hrodiy’s Kuril house between 16th and 20th September. From 16th to 26th, Hridoy raped four of these five teenagers multiple times.

Hridoy was arrested when a teenager filed a case against him.

A police official of Gulshan Division said the victims were ambitious. They wanted to act on the video-sharing site -- TikTok and Likee. Some are interested in becoming models.

A Supreme Court lawyer JR Khan Robin has sent a legal notice on October 8 to the home secretary and Bangladesh Telecommunication Regulatory Commission, seeking ban and necessary action against the use of TikTok, Likee and Bigo Live.

The lawyer will file a writ petition with the High Court if they do not take appropriate action within fifteen days of receiving the notice.

“These apps are misguiding the younger generation by impairing their morality, social norms and mutual respect,” JR Khan Robin said, adding that teenagers are getting involved in criminal activities in order to gain popularity.

According to the notice, apps like Bigo Live – that encourages youngsters to embezzle a large sum of money through mobile banking – have been banned in India, Pakistan and Indonesia considering its adverse effects on society.

The notice further states that these short videos carry pollute the new generation instead of doing any good to the society.