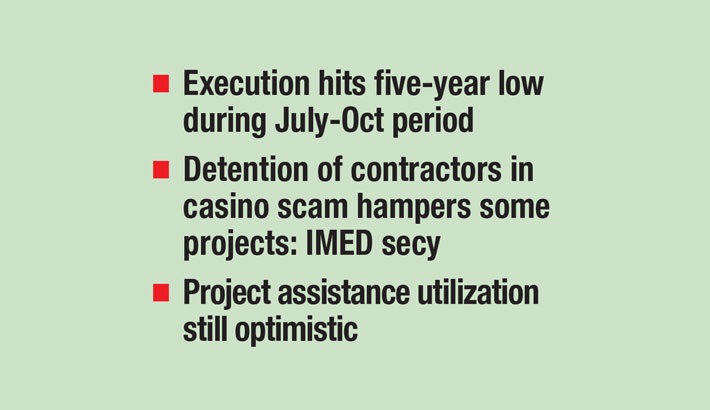 Despite showing signs of improvement in the first quarter of FY’21, ADP implementation slipped after four months thanks to poor local money utilisation performance.

During the first four months in FY’20, ADP performance was 14.25 percent with higher spending of Tk 306.52 billion.

In the first quarter of the current fiscal year, implementing agencies posted an optimistic 8.06 percent ADP performance amid Covid-19 situation, the same level a year earlier.

“The overall ADP implementation picture has been gloomy after four months because of poor performance of some ministries,” said IMED Secretary Pradip Ranjan Chakraborty.

Some projects faced slowdown as some contractors were detained last year after the casino scams, he added.

The IMED secretary said he came to know about the matter after talking with the National Board of Revenue.

The monthly performance was also higher at 4.17 percent in September compared to 3.59 percent in the same month of the last fiscal.

But the monthly performance slipped again year-on-year to 4.73 or Tk101.51 billion total expenditure in October against 6.19 percent or Tk133.08 billion ADP expenditure one year ago.

The IMED secretary said they are trying to fix the ADP implementation problems in line with the directives of Prime Minister Sheikh Hasina.

Foreign project assistance (PA) utilisation rate, however, has maintained a bullish trend this year as it rose to Tk82.84 billion or 11.75 percent from Tk76.37 billion or 10.64 percent, according to the IMED data.

The Ministry of Primary and Mass Education came top with 25.15 percent performance followed by 20.70 percent posting of Secondary and Higher Education Division and 19.81 percent by Prime Minister’s Office (PMO).