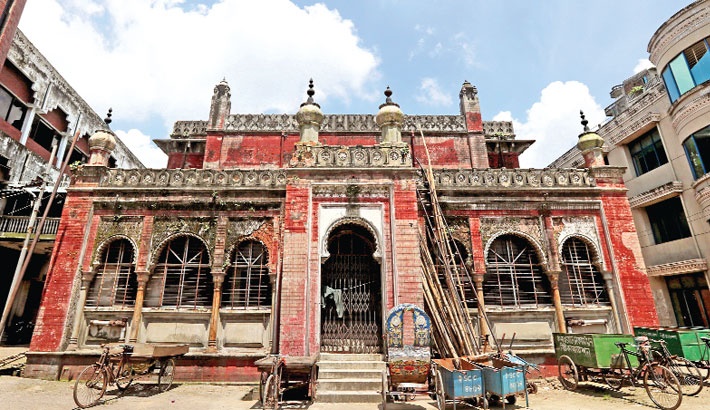 How long had it been since it heard the performance of prominent artistes? When last time it hosted a grand festival?

The Indo-Saracenic building of Northbrook Hall, also known as Lalkuthi situated on the bank of Buriganga River, is a rare fusion of Mughal and European Renaissance architectural styles.

A total of Tk 70,000 was spent on it. Albeit the construction work was completed in 1879, the hall was inaugurated on May 24, 1880, marking the birthday of Queen Victoria.

The back section of the building was transformed into a public library and named after the then Dhaka’s Commissioner Johnson. Books worth Tk 600 were brought from England in 1888 for it.

With 15,000 rare and rich books in 13 shelves this oldest library of Dhaka continued its operation there till 2017. Later two shelves with 3,500 books were shifted to the second floor of Farashganj Diabetic Samity due to the worn-out condition of the building. Northbrook Hall in Farashganj now stands empty and it is devoid of its old magnificence.

The dilapidating redbrick architecture is all that remain of what once was the centre of every gala celebration of Dhakaities.

Yet it still testifies of a time when cultural practice of the city was at its peak and all the leading scholars visit the place and artistes used to perform there.

With a community centre and the ward counsellor’s office on its right and Farashganj Club to its left the hall is hardly visible among tall structures surrounding it.

Moreover, shops and businesses have encroached on its premises.

Dhaka South City Corporation (DSCC) is the custodian of the building. They have overlooked the historic importance of Northbrook Hall for years.

However, the good thing is that recently DSCC Mayor Sheikh Fazle Noor Taposh has visited Northbrook Hall and decided to remove the encroachments soon to restore its finery.

Involving urban planners and archeologists, the DSCC have already begun the demarcation of the complex.

A team of experts will conduct a survey on the site. They will go through the archival record and bring back the old look of the amazing building.

The authorities are planning to hold a Baishakhi fair and other programmes in the premises to celebrate the next Bangla New Year.

If they can renovate the extraordinary hall and library building and preserve it properly, Northbrook Hall will be a hub of the city’s cultural practice and an outstanding place to know about Dhaka’s history and tradition.