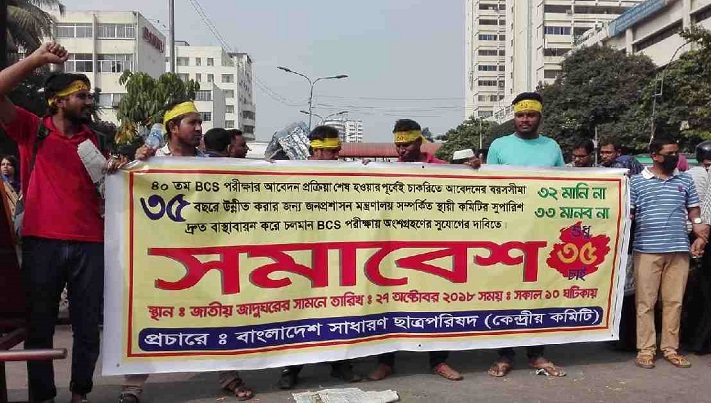 A group of students and job seekers under the banner of “Bangladesh Sadharan Chhatra Parishad” on Saturday block Shahbagh intersection demanding extension of age limit for entry into government jobs to 35 from 30. UNB file photo

The job seekers have once again demanded an increase in the maximum age limit for government jobs to 35 years and a reduction of application fee.

More than 50 job seekers joined a rally in Shahbagh on Friday under the banner of "Bangladesh Sadharan Chhatra Kalyan Parishad."

Their demands include a reduction of the job application fee to Tk50-100, recruitment exams at the district or divisional level, and completion of the hiring process within three to six months.

Muzammel Miyaji, chief coordinator of Chhatra Kalyan Parishad, said, "It is a logical demand to raise the age limit for job applications to 35 as students have to spend nearly 30 years to pursue higher education due to session jam and the educational system."

Terming the 30-year age limit unfair, Muzammel said, "We have been protesting for a long time. But the government has been ignoring our logical demand, and by this, it has been insulting, neglecting, and humiliating the unemployed, educated youths."

"However, this government promised to increase the age limit for a job application before coming to power."