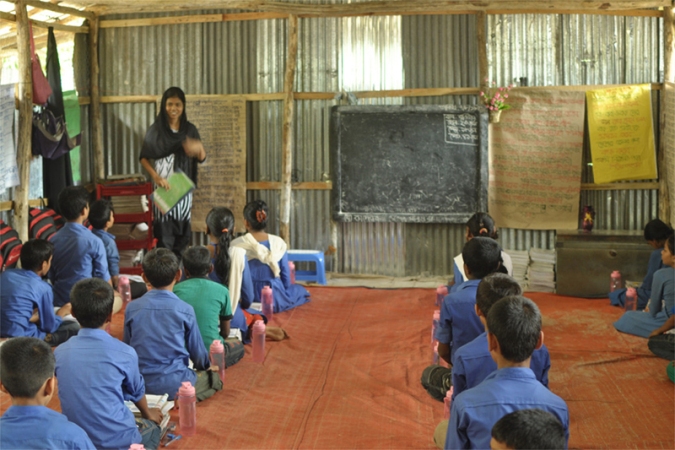 Source at the NTRCA said they collected a list of around 80,000 vacant posts at the private schools, colleges, madrasas and technical educational institutions across the country to publish advertisement seeking applications from the NTRCA certificate holders for appointment.

But the NTRCA cannot start the appointment process against the vacant posts of the teachers at the institutions due to legal complexities.

According to the NTRCA, earlier, they collected a list of 57,360 vacant posts to publish the advertisement for seeking applications from the qualified candidates for the appointment. Later, the newly appointed NTRCA Chairman, Md Akram Hossain, held a meeting on August 26 with all district education officers and sought a list of the new vacant posts.

The authority had planned to appoint against 80,000 vacant posts of teachers in two phases. Of them, 57,360 teachers will be appointed in first phase and then 22,000 will be appointed from the successful candidates of 16th NTRCA registration exam.

But the NTRCA cannot publish the advertisement to start the process for teachers’ recruitment due to a recent High Court order regarding the appointment.

In 2017, the High Court ordered the NTRCA to give certificates to the candidates and appoint the teachers making a merit list of the successful candidates in the NTRCA registration exams.

But the High Court recently ordered NTRCA to appoint the successful candidates of the 13th registration exam directly and the order came when the authority is preparing to publish advertisement seeking applications for the teachers’ appointment.

Following the apex’s court order, a legal complexity is created as the court order is against the NTRCA existing ‘Manpower Structure Policy 2018’.

Talking to daily sun, NTRCA Chairman Akram Hossain said: “We have a list of around 80,000 vacant posts of teachers at the non-government MPO-listed institutions. But wecannot publish advertisement to hire teachers due to the legal complexity.”

“We will go to the court soon and submit a petition in this regard. If the court gives us a specific directive, we will be able to further start the appointment process,” he added.

NTRCA sources said a total of 6,34,127 candidates received certificates from the NTRCA through the teachers’ registration certificate exams from 1-15th registration exams.

Of them, the age of 1,00821 candidates are over 35 and they will not get the scope to be appointed to the institutions as per the existing policy.

However, the age of 2,88,000 candidates are now below 35 and some of them have already been appointed directly to different institutions.

Meanwhile, the jobseekers who earlier received certificates from NTRCA are frustrated as over one lakh candidates have already crossed 35 years of age due to delay in the appointment process of NTRCA.

Habibullah Raju, a job seeker, said: “Over one lakh registered teachers are spending their days in extreme frustration and anxiety. Many have lost their eligibility to apply as they are over 35. Due to delay in the NTRCA advertisement, many others are constantly crossing their age of 35, which is a great pain for the certificate holders.”