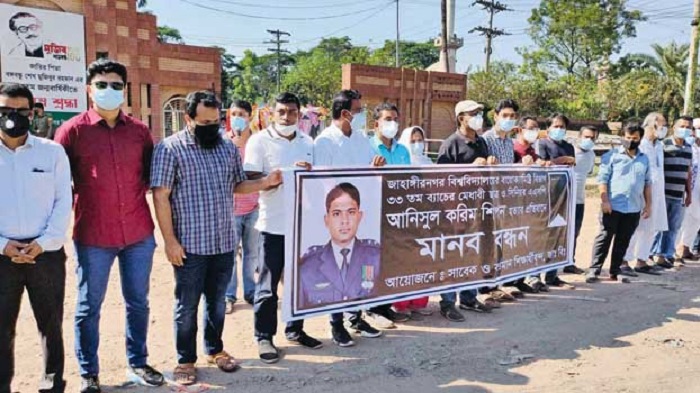 Jahangirnagar University (JU) students on Friday demanded capital punishment of those who beat Senior Assistant Superintendent of Police (ASP) Anisul Karim Shipon to death in the name of giving treatment on November 9.

Former and incumbent students of the university made the demand at a human chain formed in front of the Jatiya Press Club (JPC) in the city.

“The video footage of beating up Shipon in the name of giving treatment clearly showed that he was killed in a brutal way. We are here with the demand of ensuring capital punishment of the killers of Shipon,” former president of JU Bangladesh Chhatra League (BCL) and senate member Mehedi Jamil said at the human chain.

He demanded forming a speedy trial tribunal to ensure immediate and appropriate punishment to the culprits and stop operation of all illegal hospitals and clinics in the country.

Mehedi, also assistant secretary of the central subcommittee of Bangladesh Awami League, vowed to continue the protest until their demand is fulfilled through proper investigation.

Another JU Senate Member Ashish Kumar Majumder underscored the need for finding out the reasons behind Anisul’s mental complications.

Barrister Shihab Uddin Khan, also a JU senate member and Jahangirnagar University Lawyers’ Association (JULA) General Secretary, announced that the JULA will give all-out legal supports free of cost to the family of Shipon to get justice.

Anisul, a police officer of the 31st special BCS and a former student (33th batch) of JU Biochemistry and Molecular Biology Department, had been suffering from mental complications.

He went to Mind Aid Hospital in the capital’s Adabor area to be admitted for treatment, but he died before the admission procedure ended. CCTV footage show that some hospital staffers physically assaulted Anisul after taking him inside a room.

Police have already arrested 12 out of 15 accused in the case while 10 of them have been put on seven-day remand over the incident.