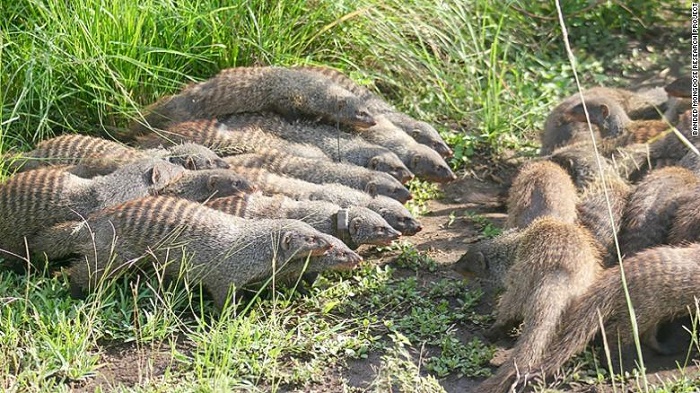 Female mongooses looking to mate with a male from a rival gang have developed a crafty method to cheat on their partners -- by starting fights, and using the violence as cover.

Banded mongooses -- so called because of the dark bands on their back -- are small, cat-like creatures found in small groups in some parts of Africa.

The territorial animals rarely leave the groups they are born into, and for this reason, group members are often closely genetically related: The female mongooses enter their fertile and mating period -- known as estrus -- within 7-10 days of one another, while males stand guard, shadowing the female and fending off rival mates.

But female mongooses have a cunning way of getting around the problem of inbreeding -- by deliberately starting fights with rival groups, and using the unfolding chaos to sneak off and mate with enemy males, researchers from two British universities found after analyzing data from a population of wild mongooses in Uganda's Queen Elizabeth National Park.

"We've known for some time that banded mongoose groups often engage in violent battles -- and now we know why," Michael Cant, a professor of evolutionary biology at the University of Exeter's Centre for Ecology and Conservation, said in a statement.

"Females start fights between groups to gain genetic benefits from mating with outsiders, while the males within their group -- and the group as a whole -- pay the costs," he said.

Researchers from Exeter and the University of Cambridge think this strategy helps the females to boost their own genetic fitness -- with no regard for the harm inflicted on other members of the group.

"Exploitative leadership in banded mongooses helps to explain why intergroup violence is so costly in this species compared to other animals," said lead study author Rufus Johnstone, a professor of evolution and behavior at the University of Cambridge.

"The mortality costs involved are similar to those seen in a handful of the most warlike mammals, including lions, chimpanzees and of course humans."

Though the females started the fights, they didn't suffer the consequences, researchers said. They found that, over a 16-year period, deaths as a result of intergroup violence occurred almost exclusively in males.

"The findings do not fit a heroic model of leadership, in which leaders contribute most to aggression and bear greatest costs, but rather an exploitative model, in which the initiators of conflict expose others to greater risks while contributing little to fighting themselves," Faye Thompson, an associate research fellow at the University of Exeter, added.

While the female mongooses who incite violence are ultimately widening the gene pool within the group, researchers say it comes at high cost to the males within the group.

The research was published Monday in the journal Proceedings of the National Academy of Sciences of the United States of America.