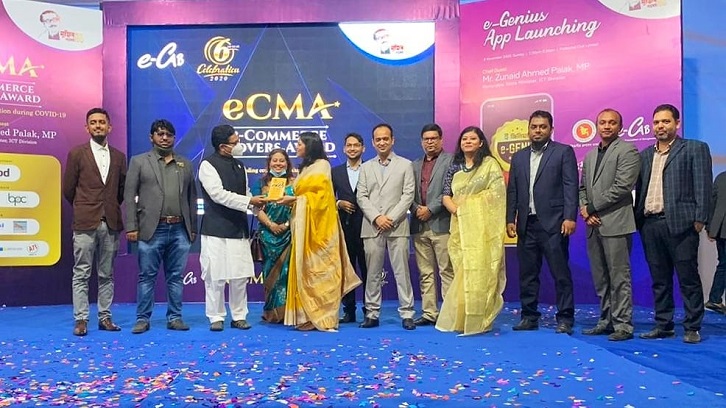 This year Ecommerce Mover’s Award goes to ecommerce-based market place Evaly.com.bd. The company has got this award for its food delivery service ‘efood’.

On Sunday (8th November) night, 100 e-commerce organizations and 12 individuals were awarded the Ecommerce Movers Award on the occasion of the sixth founding anniversary of the E-commerce Association of Bangladesh (E-Cab). The award is given for the special contribution through ecommerce during the Corona epidemic.

The award giving ceremony was held at Purbachal of the capital. Junaid Ahmed Palak, State Minister of the Ministry of Information and Communication Technology (ICT), handed over the award to Shamima Nasrin, Chairman of Evaly.

Expressing his feelings during the award giving ceremony, Evaly Founder and Chief Executive Officer (CEO) Mohammad Rassel recalled the greatest Bengali of all time, the father of the Nation Bangabandhu Sheikh Mujibur Rahman and said, "My inspiration of creating Evaly is our honorable PM Sheikh Hasina, the daughter of Bangabandhu and her vision of making Digital Bangladesh." He added, “The implementation of the Padma Bridge on the Prime Minister's own initiative has given me inspiration and courage.”

In this short duration, Evaly has launched four platforms. The platform Evaly has 4 million registered customers and 25,000 sellers. On the other hand, ‘e-food’ is the second largest food service provider in the country where about 1500 restaurants are registered and Efood delivers about 7,000 food services every day. On the other hand, customers will be able to buy and sell products on their own in ebazer, and merchants are be able to keep daily accounts in E-khata.

The identity of real leadership can be found during the time of crisis said Junaid Ahmed Palak and he expresses his optimism that one day an organization like Evaly would be the Alibaba and Amazon of Bangladesh. Palak said, just as young people left the bonding of family and dive into the war for the sake of the country and the nation during the liberation war of 1971, so did the young e-commerce entrepreneurs. They also leave their illusions for the sake of their business interests and fulfill their humanitarian responsibilities. He also said that since the inception of Corona, we have brought all e-commerce activities under Emergency Services and given them the opportunity to keep their activities going, and we have been able to ensure one lakh job opportunities through F-Commerce and E-Commerce

Palak also said that Nagad, Evaly, Mina Bazaar, Shwapno etc. have progressed and very recently they will become the giants like Amazon, Alibaba. We will report a survey in the coming days to enrich e-commerce and provide all kinds of assistance and collaboration from the Ministry of ICT to take e-commerce forward.

Md. Zafar Uddin, Secretary of the Ministry of Commerce and Shami Kaiser, President of ECAB, were present as special guest at the award giving ceremony.

The function was conducted by Mohammad Abdul Waheed Tamal, General Secretary, ECAB and among others 130 members of E-CAB were attended.