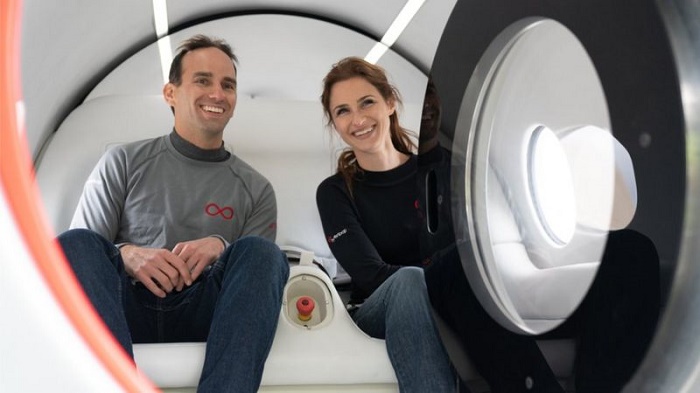 Virgin Hyperloop has trialled its first ever journey with passengers, in the desert of Nevada.

However this is a fraction of Virgin's ambitions for travel speeds of more than 1,000km/h.

Virgin Hyperloop is not the only firm developing the concept but nobody has carried passengers before.

Sara Luchian, director of customer experience, was one of the two on board and described the experience as "exhilarating both psychologically and physically" to the BBC shortly after the event.

She and chief technology officer Josh Giegel wore simple fleeces and jeans rather than flights suits for the event, which took place on Sunday afternoon outside of Las Vegas. Ms Luchian said the journey was smooth and "not at all like a rollercoaster" although the acceleration was "zippier" than it would be with a longer track. Neither of them felt sick, she added.

She said that their speed was hampered by the length of the track and acceleration required.

The concept, which has spent years in development, builds on a proposal by Tesla founder Elon Musk. Some critics have described it as science fiction.

It is based on the world's fastest magnetic levitation (maglev) trains, then made faster by speeding along inside vacuum tubes.

The Maglev train speed world record was set in 2015 when a Japanese train reached 374mph in a test run near Mount Fuji.

In a BBC interview in 2018, then Virgin Hyperloop One boss Rob Lloyd, who has since left the firm, said the speed would in theory enable people to travel between Gatwick and Heathrow airports, 45 miles apart on opposite sides of London, in four minutes.

Los Angles-based Virgin Hyperloop is also exploring concepts in other countries, including a hypothetical 12 minute connection between Dubai and Abu Dhabi, which takes more than an hour by existing public transport.

Critics have pointed out that Hyperloop travel systems would involve the considerable undertaking of both getting planning permission and then constructing vast networks of tubes for every travel path.

Ms Luchian acknowledges the potential difficulties, saying: "Of course there's a lot of infrastructure to be built but I think we've mitigated a lot of risk that people didn't think was possible."

She added: "Infrastructure is such an important focus for so many people in government. We know people are looking for solutions. They're looking for the transportation of the future. We can keep building today's or yesterday's transport systems and keep encountering the same problems they bring or we can really look to build something that solves those problems."