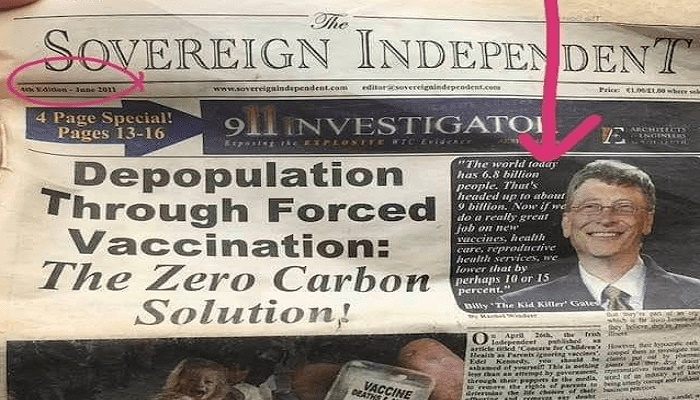 On April 26th, 2009, the Irish Independent published an article titled ‘Concern for Children’s Health as Parents ignoring vaccines’. Edel Kennedy, you should be ashamed of yourself! This is nothing less than an attempt by government, through their puppets in the media, to remove the rights of parents to determine the life choices of their offspring and removes any doubt that we now live in a dictatorship.

This is an outrageous insult to every parent in the country who has the common sense to research the efficacy of vaccines themselves by simply looking at the historical record rather than trust politicians whose lies in the media, including those perpetrated by the Dept of Health under Mary Harney regarding the farce of ‘swine flu’ and the dangerous myth of HPV vaccination, have led the country into the abyss of utter poverty and sold the country into the communist grasp of European bureaucrats whose sole aim is the destruction of every member nation’s sovereignty leaving them clutching at the bailout begging bowl of the IMF.

Vaccines are a fraud; pure and simple!

The historical record proves this for anyone with a little patience and the courage to investigate the facts for themselves, and it does take courage, especially for those in the medical profession whose careers will be at risk if they dare expose this danger to our children. It also shatters their illusions that they’re part of an organisation which is far from beneficial to those they believe they’ re protecting from illness. However, their Hippocratic Oath should compel them to investigate such wild claims put out by pharmaceutical giants and their drug dealer sales representatives instead of taking the word of an industry well known as being utterly corrupt and ruthless in its business practices.

The Irish hemophiliac scandal, where patients were knowingly infected with HIV through contaminated blood products should be enough to convince anyone of Big Parma’s murderous intent. This brings us to the real reasons for vaccinations. I’m not even going to prove to readers that they don’t work. I’ll simply urge you to look up the historical record. One simple example is the demise of measles.

These figures come from medical journals. Those 3 simple examples prove that unvaccinated children are less likely to contract measles and that the vaccine was useless. Look that up for yourself. All other vaccine claims that they’ve cured or eliminated disease follow a similar pattern. Better hygiene, clean water and good healthy food were the causes of the decline and any doctor worth his smelling salts should know that. If they don’t then they are misinformed on a grand scale or they’re in complete denial. Therein lies the problem. Why have doctors been ‘indoctrinated’ to believe that vaccines are the sacred cow of medicine when the historical record clearly shows that they are virtually useless?

Hold onto your sanity because I have some bad news for you.

The real reason for vaccinations, apart from the massive profits to the manufacturers, is to ensure that you get sick throughout your life, again not only to enrich these same corporations that made you sick, but to ensure that many, if not all of you, die before you ever receive your pension and when you are no longer any of use to society. That’s why they want you retiring later in life and are forcing you through economic terrorism to work longer regardless of your age or health. They literally want to work you to death. If you don’t work you will be classed as a burden to society, a financial cost which society has to bear, and therefore you will be stigmatised as a ‘useless eater’; a consumer of resources needed for the rest of society. When Big Pharma can no longer profit from the illness they gave you, you will be left to die.

This is the depopulation agenda promoted under the United Nations Division of Population under the Department of Economic and Social Affairs. We only need look at Africa, the nation which the United Nations has said themselves, could feed the world. Why then are millions in Africa starving to death on that continent? It’s meant to be that way folks.

All of us at one time or another have been led to believe in the efficacy of vaccines. I was one of them and had my child vaccinated nearly 35 years ago. I wouldn’t even dream of it now. I think it’s safe to say that we’re all aware of the real pandemic, as opposed to the fake pandemics of the past. It’s called ‘CANCER’. Autism is also at crisis (pandemic) levels all across the world where mass vaccination programs exist.

Prior to mass vaccination, cancers were extremely rare, as in almost nonexistent. Today in the western, so called developed world, we face a crisis of cancer to the extent that between one in five to one in two will suffer, many dying, from one form of cancer or another. What’s happened to cause this pandemic?

We only have to look back at the Jonas Salk polio vaccine that went around the world in the full knowledge that it contained the SV40 virus which had no other purpose than causing cancer; yet it was pushed as a vaccine for polio when, as with measles, polio was well in decline prior to any vaccine due to the same factors.

Enter stage right at the TED 2010 conference, Mr. Bill Gates, head of Microsoft, the biggest computer firm on the planet. What has Bill Gates to do with vaccines you’ re wondering?

See the quote in the image above. Those are his exact words. Are you beginning to get the picture?

The globalist elite care nothing for humanity; ordinary men, women and children must be eliminated in their delusional minds to ensure that their superior types go into the future with the best of breeding being the only criteria worthy of saving. You and I are no longer required and that is why we are seeing the loss of our economy, our wealth, our health, our happiness and ultimately, our lives.

In 2020, look where we are now with Gates still calling the shots!