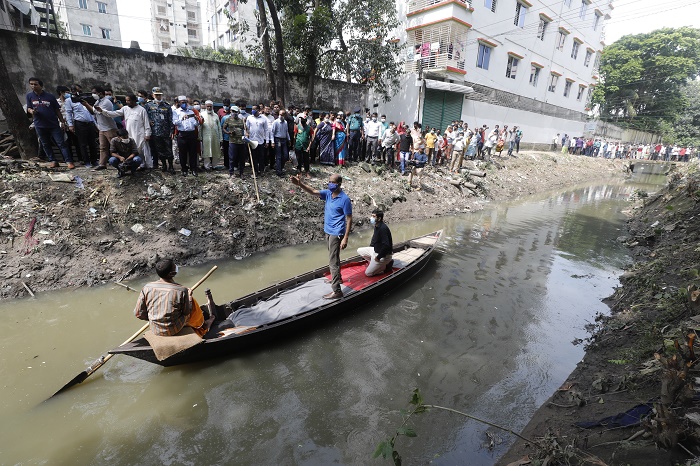 DNCC Mayor Atiqul Islam visits Godakhali canal in Mirpur area in the capital by boat after cleaning the channel clogged by garbage. The photo was taken recently. (Photo-Kamrul Islam Ratan)

Two city corporations of Dhaka have chalked out plan to revive the city canals while the government is in a fix over the handover of those watercourses from Dhaka Water Supply and Sewerage Authority (WASA) to the city authorities.

Before formally taking over the authority of the canals, the Dhaka North and South City Corporations have started cleanliness and maintenance of the channels to get rid of water logging and mosquito menace.

The city corporation sources said due to the negligence of Dhaka WASA, most of the city canals are dying either by being blocked by waste or bybeing grabbed.

That’s why, the city corporation authorities want to take the responsibility as the organisations are accountable to the city dwellers.

Earlier, themayor of Dhaka South City Corporation, Sheikh Fazle Noor Taposh,and Dhaka North City Corporation, Atiqul Islam, demanded that they be tasked with the management of the city canals as the capital experiences water logging due to the blockage in the channels.

Mayor Taposh said they have are empowered by the local government act, 2009 (City Corporation) to preserve and maintain the canals.

DNCC Mayor Atiqul Islam said that people often vent their anger at the city corporationsbecause of water logging which is caused by the clogged-up canals.

He also alleged that WASA does not clean canals and the drainage properly, and for that rain water cannot pass through the watercourses.

Mayor Atiqul Islam outlines his plan to revive the city canals and for that he has taken up some programmes.

Talking to daily sun, Atiqul Islam said, “The canals under DNCC will be widened up to 100 feet. A walkway will be built to protect the canals form grabbers permanently. Besides, water transport will be introduced to the canals to make them viable.”

He also said they will construct walkways along the banks of the canals gradually.

Dhaka South City Corporation also is planning to revive the 10 water bodies under its 10 zones.

Talking to daily sun chief urban planner of DSCC Sirajul Islam said, “We are designing a development project plan to preserve the water bodies including canals. As per our plan, we will revive the lost flow of water in some water bodies.”

“We will first conduct the survey as per CS and RS record to demarcate our canals and other water bodies. Then we will carry out cleanliness drives at the canals to restore water flow. We will also recover the land of the canals if it is grabbed.”

He added the authorities are planning to construct fence, walkway to prevent the land from being grabbed and sitting arrangement will be made for the people.

Meanwhile, DSCC mobile court demolished 10 illegal establishments along the banks of the canal.

DSCC chief estate officer Rasel Sabrin said, “The mayor ordered us to revive the water flow of the canals by removing waste and preventing the dumping of trash into the canals. Fence will be built along the banks.”

Govt yet to decide on canal handover

Senior secretary to the Local Government, Rural Development and Cooperatives Ministry Helal Uddin Ahmed told daily sun Monday said, “The government is considering the demand of two mayors of Dhaka South and North City Corporations of handing over the responsibility of the management of the canals to them. We will sit with the two authorities very soon to settle the issue.”

He said the government will check the financial,technical manpower capacity of city corporationsfor the management of canals.

“In the big cities of developed countries, the management of canals and other utilities services are vested in the city authorities also, but our city corporation is less capable to shoulder much responsibilities,” he stated.

“We were supposed to sit anddiscussthe handover issue, but due to absence of DSCC mayor, we are yet to take any decision. If both parties agree, the ministry has no problem hand over the responsibility of maintenance.”