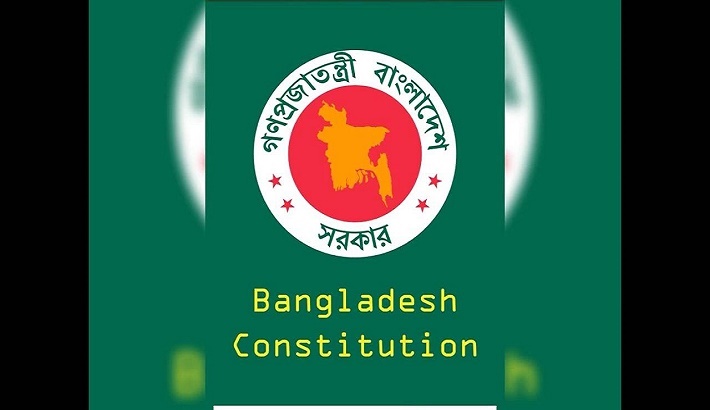 The nation needs enactment and enforcement of constitutional obligatory laws, including the one on formation of the Election Commission, to smoothly run the state affairs in the light of the country’s highest charter, experts said.

Although 49 years have elapsed since the country’s independence, no government has taken initiative to fully implement the constitutional obligation.

The Constitution of the People's Republic of Bangladesh was adopted on November 4, 1972 after the country’s independence on December16 in 1971.

The Constitution provides a framework for a parliamentary government, fundamental human rights and freedoms, an independent judiciary, democratic local government and national bureaucracy.

Father of the Nation Bangabandhu Sheikh Mujibur Rahman gifted the nation a constitution only 11 months after the country’s independence.

Legal experts stressed the need for enactment and enforcement of some constitutionally obligatory laws as the country is going to observe Constitution Day today (November 4).

The Constitution made it obligatory for the government to enact a good many laws to smoothly run the state affairs and avoid any unwarranted political disputes.

They said laws need to be enacted on the privileges of lawmakers, jurisdiction of parliamentary standing committees [especially in case of enforcing attendance of witnesses and interrogating them on oath and compelling the production of documents], qualifications of judges of

Article 77 (1) of the Constitution provides “Parliament may, by law, provide for the office of Ombudsman. (2) The Ombudsman shall exercise such powers and perform such function as Parliament may, by law, determine, including the power to investigate any action taken by a Ministry, a public officer or a statutory public authority.(3)The Ombudsman shall prepare an annual report concerning the discharge of his function and such report shall be laid before Parliament.”

Prior to the reprint of the Constitution in 2010 that included and excluded many provisions as per Supreme Court verdict, the parliamentary standing committee wanted to have constitutional obligatory laws to be examined.

Sources said the Law Commission was working on the issue. As the task was incomplete, the commission could not submit its report to the standing committee.

The standing committee sent several letters to the Law Commission, asking it to finish its task and send report.

Nearly 20-22 constitutional obligatory laws have already been enacted and now it is the task of the government to enact the remaining obligatory laws.

As per the decision taken by the legislative panel on law, justice and parliamentary affairs in May 2010, the government sent a list of constitutionally obligatory laws to the Law Commission for scrutiny.

The parliamentary body also asked the law ministry to take necessary measures to comply with the provisions of the Constitution to which a total of 17 amendments have been made so far.

“We’ll try to highlight dreams of Father of the Nation Bangabandhu Sheikh Mujibur Rahman who gifted a constitution within 11 months after independence. He was able to unite the nation through this constitution. We should renew pledge to go by it. No other countries, except Bangladesh could adopt a constitution so early,” he said.

As per Article 107 of the Constitution, the Supreme Court, however, has made rules to regulate practice and procedure of the High Court Division and the Appellate Division.

Senior lawyer of Supreme Court Shah Monjurul Hoque said, “We (lawyers) are demanding a law for specifying qualification of High Court judges. Chief Justice also sometimes speaks about the issue. The judges are being appointed based on some criteria. Going beyond it, rules should be made specifying detailed qualifications for becoming a judge.”

About the necessity of Ombudsman, he said any government department, including Anti-Corruption Commission, can be accountable to Ombudsman to ensure transparency of their functions and check any abuse of power.