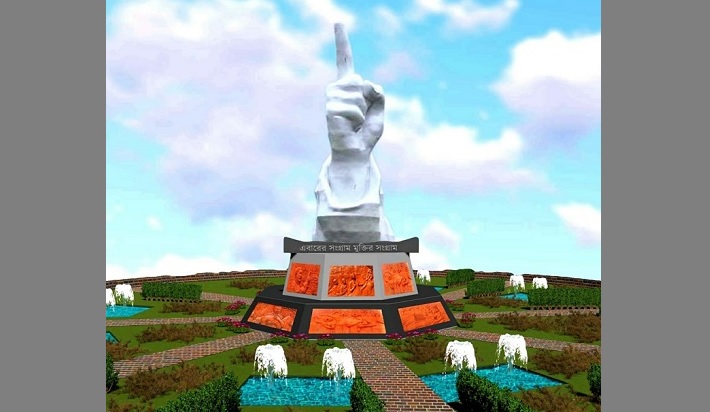 Country’s highest sculpture ‘MuktirDak’ reads ‘Call for Redemption’, featuring the historic 7thMarch Speech of the Father of the Nation Bangabandhu Sheikh Mujibur Rahman, is going to be inaugurated soon at the entrance of Narsingdi town on Dhaka-Sylhet highway.

Sculptor Auli Mahmud of the 41 feet high ‘MuktirDak’ said the construction work of his sculpture was started 13 months earlier and it is almost completed and waiting for inauguration.

The sculpture has already been attracting the people passing by and recalling the historic speech of the Father of the Nation.

“I hope my sculpture will reflect the glorious fight for freedom of Bangladesh in 1971 and it will stop the pedestrians for the moment to recall the Seventh March’s historic speech,” said Auli Mahmud.

The ‘MuktirDak’ represents the pride of Bengali nation and moreover it’s the symbol of movement against injustice, a fight and the freedom of the nation, he said adding that the finger of Bangabandhu energizes all the Bengalis.

Auli Mahmud has depicted the whole sculpture through terracotta featuring the language movement, movement of 1969, the six-point demand and the glorious war for freedom against injustice.

He has used modern optical fiber, white cement, stones in building the sculpture at the Saheprotap intersection of the town.

Water font has been set up around the sculpture as well while the work of constructing landscape is going on in full swing.

The main entrepreneur of the sculpture, Narsingndi Municipality Mayor and town Awami League President Kamruzzaman Kamrul, said “Bangabandhu has brought us the freedom by a single call through his ‘MuktirDak’ and Bengali people love him more than anything.”

The ‘MuktirDak’ of Bangabandhu represents the pride of Bengali nation. Still today, the index finger of the Father of the Nation Bangabandhu Sheikh Mujibur Rahman provides energy to the new generation, he added.

A son of a Freedom Fighter also the sculptor of MuktirDak, said “Bangabandhu means power and inspiration. Bangabandhu will live through his great eloquence, humanity and deep compassion towards people.”

The sculpture ‘MuktirDak’ is one of the main three sculptures of the earth from the perspective of its height and this one is the largest one featuring ‘Tarjani’ or index finger, claimed Auli Mahmud.