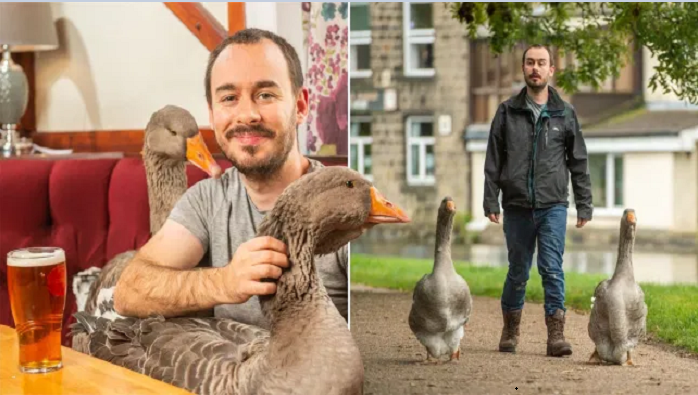 A man who adopted two pet geese during lockdown has started taking them to his local pub wearing nappies. Sven Kirby, 34, is regularly spotted walking the birds, named Norbert and Beep Beep, around the streets of Leeds and the odd trio has now branched out into socialising in their local.

The admin assistant hand-reared the birds from five days old after buying them for £40 each in last June.

He lets them have free rein of the house when he’s at home while he keeps them in a pen in the garden when he’s out.

Sven, who lives on his own, said: ‘I know a goose is a strange pet but it’s something different that I have wanted for a while.

‘I could have got a dog but as I work full time I didn’t think that was very fair, geese require much less attention.’

‘I love the two of them, they’re brilliant characters and great fun to keep as pets.’

Sven first got the idea of keeping geese a few years ago when he was in York visiting his then girlfriend and saw some waddling along the riverbank.

He said: ‘My ex wasn’t too keen on the idea so when we broke up I decided it was my chance to finally do it.’

When lockdown hit, he did some research and found his nearest breeder was in Grantham, Lincolnshire, so set off on the 160 mile round trip.

After parting with £80 he returned back to Leeds with the two male geese from the same clutch. Beep Beep was named after the sound the bird makes.

They are giant exhibition dewlap Toulouse geese which are often bred for foie gras, meaning they’re used to being handled and therefore generally docile. They can live for up to 40 years.

Sven said the pair haven’t had any behavioural problems and have generally been easy to keep, as they don’t require much exercise and have a diet 80% made up of grass. However, they can’t be potty trained so he does have to put them in specially made goose nappies shipped in from America when they’re inside the house.

Sven added: ‘They’re very happy and friendly animals, which makes them great to keep as pets.